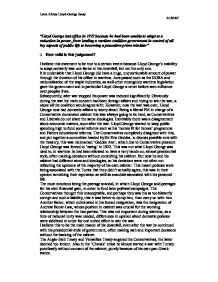 Lloyd George lost office in 1922 because he had been unable to adapt to a reduction in power, from leading a wartime coalition government in control of all key aspects of public life to becoming a peacetime prime minister

"Lloyd George lost office in 1922 because he had been unable to adapt to a reduction in power, from leading a wartime coalition government in control of all key aspects of public life to becoming a peacetime prime minister" * How valid is this judgement? I believe this statement to be true to a certain extent because Lloyd George's inability to adapt certainly was one factor in his downfall, but not the only one. It is undeniable that Lloyd George did have a huge, unquestionable amount of power through the duration of his office in wartime. Acts passed such as the DORA and nationalisation of the staple industries, as well other emergency wartime legislation gave the government and in particular Lloyd George a never before seen influence over peoples lives. ...read more.

This was not what Lloyd George was used to, in wartime he had been allowed to have a very hands on, almost presidential style, often making decisions without consulting his cabinet. But now he and his cabinet had different aims and ideologies, so his decisions were not often not reflecting the opinions of the majority of his own cabinet. This meant policies were being associated with the Tories that they didn't actually agree, this was in their opinion tarnishing their reputation as well as scandals associated with his personal life. The most notorious being the peerage scandal, in which Lloyd George sold peerages for his own financial gain, in order to fund later political campaigns. The Conservatives thought this unacceptable, and perhaps they saw his as too blatantly corrupt and such a liability, that it was better to dump him, than carry on with him. ...read more.

Due to problems with the economy and the failure of his reforms, Lloyd George was not as popular as he had been previously especially as he had been during the war, (soon after the war he was called. 'The man who won the war'). So as he had clashed so many times with the Conservatives over varying issues, and made many rash decisions without their consent, they agreed that they no longer needed him as their head and eventually ditched him at the Carlton Club meeting in 1922. Ultimately, although not the only reason, I believe Lloyd George's inability to adapt to the needs of a peacetime government, was the most important factor, which led to his downfall. Because although, during peacetime, a completely different style was needed, he continued as he had done throughout the war. ?? ?? ?? ?? Louis Allday Lloyd-George Essay 01/05/07 ...read more.