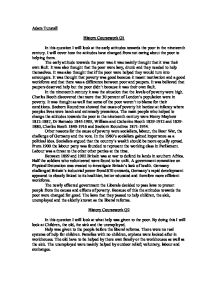 Look at the early attitudes towards the poor in the nineteenth century.

Adam Tunstall History Coursework Q1 In this question I will look at the early attitudes towards the poor in the nineteenth century. I will cover how the attitudes have changed from not caring about the poor to helping them. The early attitude towards the poor was it was mainly thought that it was their own fault. It was also thought that the poor were lazy, drunk and they needed to help themselves. It was also thought that if the poor were helped they would turn into scroungers. It was thought that poverty was good because it meant motivation and a good workforce and that there was a difference between poor and paupers. It was believed that paupers deserved help but the poor didn't because it was their own fault. In the nineteenth century it was the situation that the levels of poverty were high. Charles Booth discovered that more that 30 percent of London's population were in poverty. It was thought as well that some of the poor weren't to blame for their conditions. Seeborn Roundtree showed that cases of poverty hit hardest at infancy where peoples lives were harsh and extremely precarious. ...read more.

These acts meant that children could get free school meals, annual medical inspection and children could be protected from their parents. The old age had a pensioners act from the liberal reforms. This act meant pensioners were entitled to 25p per week, married pensioners 37 and half pence. You had to be over 70 to be eligible. This act prevented old people from entering the workhouse. The sick had a national insurance act from the liberal reforms; this meant free health care from 1911. The unemployed also had a national insurance act and benefits from the government. There were limitations to the acts of the reforms. For children, not all got free school meals and the medical check was only for identifying problems not for treatment until after 1912. The old, pensions only applied to the people who earned under 60p a week, also not many people reached the age of 70. The sick, the act was confined to construction jobs, 35p wasn't a lot of money and the government didn't want people getting lazy, because of this only 15 weeks cover was given. The unemployed, only people who earn't less than �160 a year could join and the free medical was only for the worker not for the family. ...read more.

Charles published 17 books in total and he proved that more that 30 per cent of London's population lived in poverty. He said that the problem is caused by low wages, casual work and trade depressions. Seebohm Roundtree lived from 1871-1954 and his place of work was in London. The Roundtree family had the reputation of making chocolate and caring for employees. Seebohm showed that poverty hits hardest in infancy and that the lives of the poor were extremely precarious. Thirdly I will look at the liberals and conduct a conclusion, the liberal party was a good invention of the twentieth century. The liberal reforms focused on the poor and the labourers who needed attention because of their poor working conditions, wages and lifestyle. The poor and the labourers had been ignored by the general public. Individuals helped but in a minimal way and who didn't have the power to help the nation. The liberal party did however had national power and could change the way the country was thought about and run. In a conclusion I would say that the Liberal Reform's helped the poor the most because unlike individuals who only helped the poor within the city of London the Liberal Reforms helped the nation. ...read more.