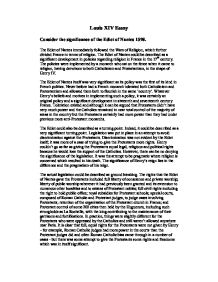 Louis XIV - Consider the significance of the Edict of Nantes 1598.

Louis XIV Essay Consider the significance of the Edict of Nantes 1598. The Edict of Nantes immediately followed the Wars of Religion, which further divided France in terms of religion. The Edict of Nantes could be described as a significant development in policies regarding religion in France in the 17th century. The policies were implemented by a monarch who sat on the fence when it came to religion, having devotions to both Catholicism and Protestantism, in the shape of Henry IV. The Edict of Nantes itself was very significant as its policy was the first of its kind in French politics. Never before had a French monarch tolerated both Catholicism and Protestantism and allowed them both to flourish in the same 'country'. Whatever Henry's beliefs and motives in implementing such a policy, it was certainly an original policy and a significant development in sixteenth and seventeenth century France. Toleration existed and although it can be argued that Protestants didn't have very much power and the Catholics remained in near total control of the majority of areas in the country but the Protestants certainly had more power than they had under previous more anti-Protestant monarchs. The Edict could also be described as a turning point. ...read more.

He wanted to protect the southern border of France from the Spanish and Austrian Hapsburgs. Henry was more patriotic than the French kings before him and his policies show this as he placed the Protestants in the south of France, using the Protestants to protect France from Spain. All of this means that - in terms of French foreign policy - the Edict of Nantes carries further significance for a number of reasons... The removal of the Protestants away from Paris and further towards the south means that Henry IV embarked on a policy of centralisation. There is no doubt that Henry converted to Catholicism and tried to maintain as much power as possible for his Catholic friends in the establishment. Policies were made more in a centralised way i.e. from Paris and the Protestants were freezed out in positions of power by the Catholics. This is significant because of the reign of Louis XIII who furthered the centralisation policy, and shows that there was a trend towards centralisation before Louis XIII came onto the throne. This also shows that Henry's domestic and foreign policy can easily be linked, which is also significant. All of this emphasises how significant the Edict of Nantes was. ...read more.

However, the very fact that the Wars of Religion didn't happen again throughout Henry IV's reign is very significant considering the huge division between the two religions. Another War of Religion could have shaped French history differently, especially if the Protestants/Calvinists came out on top. Today's France could also have been completely different if a war wasn't avoided. This makes Henry's reign and - of course - the Edict of Nantes take on further significance. The Edict of Nantes certainly cannot be described as revolutionary but it was almost a complete reform of the laws regarding religion. In reality, there was little reform because there was major exploitation of flaws in the law by the Catholics. However, this shouldn't take anything away from the significance of the Edict of Nantes because the laws created Protestant strangleholds in the south of France. Despite all this, the Edict of Nantes takes on an apparent lack of significance because of what happened to Henry and what happened under the reigns of subsequent monarchs. The Edict was indeed revoked in 1685 and steadily the Catholics moved towards a position of total power over the Protestants. So this means that the Edict of Nantes loses some of its significance because the policies of Henry had no impact on future monarchs. During Henry's reign, however, significance can be attached to the Edict. ...read more.