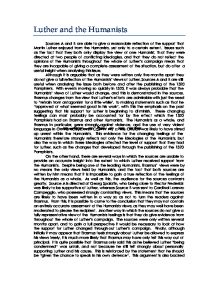 Luther and the Humanists

Luther and the Humanists Sources A and B are able to give a reasonable reflection of the support that Martin Luther enjoyed from the Humanists, yet only to a certain extent. Issues such as the fact that they both only display the view of one Humanist, that they were directed at two people of conflicting ideologies, and that they do not reflect the opinions of the Humanists throughout the whole of Luther's campaign mean that they are incapable of giving a complete assessment of the situation, but do offer a useful insight when analysing this issue. Although it is arguable that as they were written only five months apart they do not give a full reflection of the Humanists' views of Luther, Sources A and B are still useful when analysing the issue both before and after the publishing of the 1520 Pamphlets. With events moving so quickly in 1520, it was always probable that the Humanists' views of Luther would change, and this is demonstrated in the sources. ...read more.

On the other hand, there are several ways in which the sources are unable to provide an accurate insight into the extent to which Luther received support from the Humanists. Despite being one of the leading Humanists, Erasmus' views were by no means the only views held by Humanists, and the fact that both sources are written by him means that it is impossible to gain a true reflection of the feelings of the Humanists as a whole. As well as this, the audience for the sources contrasts greatly. Source A is directed at Georg Spalatin, who being close to Elector Frederick was likely to be supportive of Luther, whereas Source B was sent to Cardinal Lorenzo Campeggio, who possessed strongly contrasting views. This means that the sources are likely to have been written in a way so as not to turn the readers against Erasmus. From this, it is possible to come to the conclusion that they may not contain an entirely accurate assessment of the Humanists views, as they may well have been moderated to please the recipient. ...read more.

those of Luther, it is most probable that Erasmus simply felt that Luther deserved the opportunity to express these new and intriguing ideas. Combined, this evidence would suggest that it is certainly possible to argue that the sources do not give a fully representative view of the support that the Humanists had for Luther. On balance, although Sources A and B are useful as they show what one of the leading Humanists of the time believed, they do not fully reflect the ideas of the Humanists as a whole and so cannot be used to categorically decide on how much support Luther received from this group. As well as this, they do not outline the views of the Humanists throughout the reformation, and it can be argued that the content of each of the sources will have been affected by who they were directed at, mean that however useful they me be at analysing a certain section of this issue, they do not provide conclusive evidence for the level of humanist support Luther received. ...read more.