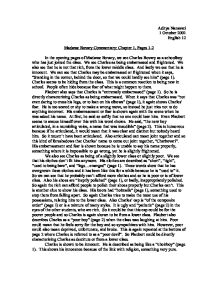 Aditya Nanavati 1 October 2001 English 12 Madame Bovary Commentary: Chapter 1, Pages 1-2 In the opening pages of Madame Bovary, we see Charles Bovary as a schoolboy who has just joined the class. We see Charles as being embarrassed and frightened. We also see that he is not that rich, from the lower middle class. And lastly we see that he is innocent. We can see that Charles may be embarrassed or frightened when it says, "Standing in the corner, behind the door, so that we could hardly see him" (page 1). Charles seems to be hiding from the class. This is a common reaction to being new in school. People often hide because fear of what might happen to them. Flaubert also says that Charles is "extremely embarrassed" (page 1). So he is directly characterizing Charles as being embarrassed. When it says that Charles was "not even daring to cross his legs, or to lean on his elbows" (page 1), it again shows Charles' fear. ...read more.

We also see Charles as being of a slightly lower class or slightly poor. We see that his clothes don't fit him anymore. His clothes are described as "short", "tight", "used to being bare", and "legs...emerged" (page 1). These words show that he has overgrown these clothes and it has been like this for a while because he is "used to" it. So we can see that he probably can't afford more clothes and so he is poor or is of lower class. Also his shoes are "ineptly polished" (page 1), or badly, inappropriately polished. So again the rich can afford people to polish their shoes properly but Charles can't. This is another clue to show his class. His boots had "hobnails" (page 1), something used to stop them from falling apart. So again Charles tries to make the most use of his possessions, relating him to the lower class. ...read more.

Again this liaison with religion or the church shows Charles as being innocent or pure. Charles naivety is shown when "the form master had to tell him to get into line with the rest of us" (page 1). Charles doesn't know what to do, clearly showing that he is inexperienced. This happens again with his cap. After recess, everyone put their caps away but Charles kept his with him, not knowing what to do with it. This is a mixture of his innocence and fear of doing something he wasn't supposed to. The teacher had to tell him to put his cap away instead of Charles doing it himself. In this passage, we are introduced to Charles character when he was a child by one of his fellow classmates. We learn that Charles is embarrassed and frightened on his first day at school. He is also portrayed as being innocent. We also see that Charles is from a lower class. These characteristics of Charles will lead him to be controlled by others for the rest of his life and will eventually lead to his downfall. ...read more.