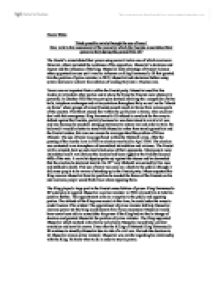 Made Possible Mainly By The Use Of Terror. How valid is this assessment of the means by which the Fascists consolidated their power in Italy during the period 1922-26?

Nicola White 'Made possible mainly through the use of terror' How valid is this assessment of the means by which the Fascists consolidated their power in Italy during the period 1922-26? The Fascist's consolidated their power using several tactics one of which was terror. However, others included the weakness of the opposition, Mussolini's decisions and impact and the influence of the king. Mussolini took advantage of Fascist violence when opportunities rose yet it was his influence on King Emmanuelle III that granted him the position of prime minister in 1922. Mussolini took decisions further using several devices to achieve his ambition of leading Italy into a Fascism rule. Terror was an important factor within the Fascist party. Mussolini used his Ras leaders to intimidate other parties and to show the King the Fascists were physically powerful. In October 1922 the two part plan devised involving the occupation of town halls, telephone exchanges and railway stations throughout Italy as well as the 'March on Rome' where groups of armed Fascists would march to Rome from various parts of the country. ...read more.

This appointment came as a surprise to the public and opposing parties. The attitude of the King was crucial at this time; he could order the army to crush Fascism if he wished. The appointment of prime minister did help Mussolini increase power yet the King could demote him if seen necessary. Mussolini would have never been able to consolidate his power if the King had not had a change of decision and granted Mussolini the position of prime minister. The King supported Mussolini which worked in his favour as he knew Mussolini would help prevent revolution and save his crown. Even after the killing of Matteotti King Emmanuelle III continue to stand by Mussolini due to risk of a civil war. He took the decision to let Mussolini remain prime minister. Mussolini was careful regarding his relationship with the King. He knew what to do in order to stay in power. Mussolini's influence and ideas greatly contributed to the Fascist consolidation of power. ...read more.

This meant they could not act out against Mussolini as the King would not remove his position of prime minister. Mussolini's opposition failed to exploit the situation and he was eventually able to use it to establish a personal dictatorship. The Fascist's consolidated their power using methods of terror, exploiting the parliament, getting on the right side of the king and using Mussolini's ideas. The Matteotti crisis worked to the Fascist advantage in the end and helped secure their power. From 1925 onwards Mussolini gained the power to issue decrees; replaced the local government, abolished other parties and created the OVRA. The consolidation of power had taken place. Terror had been vital in helping the Fascist remain while Mussolini was prime minister however; the King's decision to firstly appoint Mussolini then let him keep his position meant they were able to consolidate their power. Luck, Mussolini's speeches and exploitation were also key factors as well as poor choices by the opposing forces, the Aventine Succession weakened the opposition and allowed Mussolini to make vast decisions in his creation of this totalitarian state. ...read more.