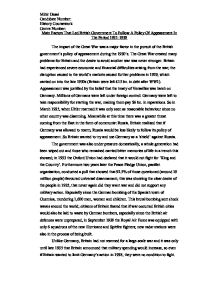 Main Factors That Led British Government To Follow A Policy Of Appeasement In The Period 1931-1938 The impact of the Great War was a major factor in the pursuit of the British government's policy of appeasement during the 1930's. The Great War created many problems for Britain and the desire to avoid another war was never stronger. Britain had experienced severe economic and financial difficulties arising from the war; the disruption caused to the world's markets caused further problems in 1929, which carried on into the late 1930s (Britain were left �15 bn. in debt after WW1). Appeasement was justified by the belief that the treaty of Versailles was harsh on Germany. ...read more.

Furthermore two years later the Peace Pledge Union, pacifist organisation, conducted a poll that showed that 92.5% of those questioned (around 10 million people) favoured universal disarmament; this was showing the clear desire of the people in 1935, that never again did they want war and did not support any military action. Especially since the German bombing of the Spanish town of Guernica, murdering 1,600 men, women and children. This brutal bombing sent shock waves around the world; citizens of Britain feared that if war occurred British cities would also be laid to waste by German bombers, especially since the British air defences were unprepared, in September 1938 the Royal Air Force was equipped with only 6 squadrons of the new Hurricane and Spitfire fighters; new radar stations were also in the process of being built. ...read more.

So in this way Britain chose to appease during the Munich agreement to try and avoid a war over the Sudetenland; after all this is what the people wanted. This choice to appease gave Britain the vital time to rearm preparing its people for war emotionally and time to prepare its armed forces. As they realised they would not just be fighting Germany, but Japan and Italy as well, since they were a danger to their empire and British interests, especially in East Africa and the Far East. So Britain chose to follow appeasement in this way as they lacked the will, the money and the power. Word count: 602 words Mihir Desai Candidate Number: History Coursework Centre Number: ...read more.