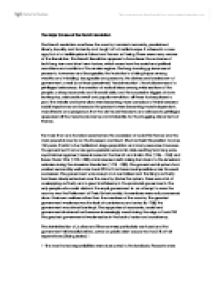 The Major Causes of the French Revolution The French revolution overthrew the country's ancient monarchy, proclaimed Liberty, Equality and Fraternity and fought off a hostile Europe. It ushered in a new age, but at a terrible price in blood and human suffering. There were many causes of the Revolution. The French Revolution appears to have been the outcome of both long term and short term factors, which arose from the social and political conditions and conflicts of the ancien regime. The long standing grievances of peasants, townsmen and bourgeoisie; the frustration's of rising hopes among wealthy and 'middling' bourgeoisie and peasants; the distress and breakdown of government; a real (or at least perceived) 'feudal reaction'; the stubbornness of a privileged aristocracy; the creation of radical ideas among wide sections of the people; a sharp economic and financial crisis; and the successive triggers of state bankruptcy, aristocratic revolt and popular revolution: all these factors played a part. The middle and lower class were becoming more conscious of their increased social importance and because the peasants were becoming more independent, more literate and prosperous that the old feudal freedoms and aristocratic privileges appeared all the more burdensome and intolerable for the struggling discontents of France. For more than one hundred years before the accession of Louis XVI, France was the most powerful country on the European continent. She had held this position for over 150 years, thanks to her fertile land, large population and many resources. However, the government had under gone periodic economic crisis, resulting from long wars, royal mismanagement, losses incurred in the French and Indian War (1756-1763) and Seven Years' War (1775-1783) and increased debt arising from loans to the American colonies during the American Revolution (1775-1783). The governmental system had worked reasonably well under Louis XIV but had become impossible under his weak successors. The government was corrupt and centralized and the King's authority had been slowly extended over the country. ...read more.

The Third Estate comprised of most of the population, ranging from rich businessmen to poor peasants. These members had no privileges and played no part in government and running the country. "Providence, ever watchful, well knows that this evil brood, the aristocrats, would always, in France, be like a bad seed growing on good land." 4 Most were peasants and made 80% of the population. They had a hard life and most didn't own the land they farmed on. As well as paying rent, they had to work free of charge for the local landowner on certain days of the year. They had to pay taxes to the government, like the taille and the gabelle (salt tax), and tithes to the church. Sometimes they paid three quarters of their yearly income in taxes. They were also expected to fight whenever France went to war. Arthur Young states "poor...miserable, much arising from the minute division of their little farms among all other children..."5 Tocquville believes the middle class were becoming increasingly richer and more conscious of their social importance. Further more, because the peasants were becoming free, literate and prosperous the old feudal survivals and aristocratic privileges appeared more vexatious and intolerable. The 'Abbe Sieyes' phamplet stated the Third Estate was "everything" in the sense it was "a complete nation", which would survive without the other two orders. Meanwhile poverty and discontention spread. Communications were poor and economic life was sluggish and such improvements such as good harvest were being torn away by climatic deterioration and the rising population. Poverty was the most recognizable social problem. With the misery of rural housing and the poor appearance of the peasantry were contributing to discontention throughout the land. "All the girls are without stockings..."6 Hours were long and the price rise of bread was considered the worst times for public order.7 When jobs failed they turned to the streets for begging. ...read more.

Other social and economic reforms initiated during this period included eliminating imprisonment for debt, introducing the metric system and abolishing the rule of primogeniture in the inheritance of land. An additional area that the revolution played an important part was that of religion.12 The revolution paved the way for the separation of state and church. The more fragile results of the revolution were symbolized in its slogan, "Liberty, Equality, Fraternity". These ideals became the policies of liberal reforms in Europe in the 19th century and remain the present day passwords for democracy. The causes of the French revolution have been endlessly debated. The French Revolution may be approved as an entire part of a permanent revolution whose origins are both economic and political. Assessment of impact has resulted in two successive changes. The Marxist, which portrayed the revolution as bringing about the final end to the feudal system making the way for the emergence of the modern capitalist society. I believe the French Revolution shouldn't excepted as a significant historical event. Although the supreme power was transferred from king to nation and although the revolutionaries wanted to remove the obstacles to the development of a market economy, it appears that France in 1815 wasn't so very different to France in 1789. It remained essentially pre-industrial society dominated by a landed elite. It was only later that a radical social transformation occurred. The French Revolution is one of the foundation conscious and in civil status for Jews and Protestants. Competition for power had left bitter division within the elite and expressed the ambitions and goals of other groups, stones of coexisting political culture and the modern state. The French Revolution's classic status can be a drawback, as it encourages us to think greatly about which historical research we don't support. The French Revolution, however, created tension and an intense sense of insecurity throughout France. It brought about a free society dominated by the middle class and landowners and it brought about great changes in the society and government in France. ...read more.

The author demonstrates a great deal of knowledge about the French Revolution and there is some excellent detail and analysis of different causes. However, the structure could have been better planned to avoid repetition, narrative and drifts in focus. 4 out of 5 stars.