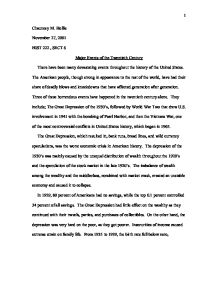 Major Events of the Twentieth Century

Chauncey M. Hollie November 27, 2001 HIST 222 , SECT 6 Major Events of the Twentieth Century There have been many devastating events throughout the history of the United States. The American people, though strong in appearance to the rest of the world, have had their share of deadly blows and knockdowns that have affected generation after generation. Three of these horrendous events have happened in the twentieth century alone. They include; The Great Depression of the 1930's, followed by World War Two that drew U.S. involvement in 1941 with the bombing of Pearl Harbor, and then the Vietnam War, one of the most controversial conflicts in United States history, which began in 1965. The Great Depression, which resulted in, bank runs, bread lines, and wild currency speculations, was the worst economic crisis in American history. The depression of the 1930's was mainly caused by the unequal distribution of wealth throughout the 1920's and the speculation of the stock market in the late 1920's. The imbalance of wealth among the wealthy and the middleclass, combined with market crash, created an unstable economy and caused it to collapse. In 1929, 80 percent of Americans had no savings, while the top 0.1 percent controlled 34 percent of all savings. The Great Depression had little effect on the wealthy as they continued with their travels, parties, and purchases of collectibles. ...read more.

Soon after, the Allies halted advances by the Axis at El Alamein in North Africa, off Midway Island in the Pacific, and at Stalingrad in Russia. The Allies arrived on Japan's doorstep with an amphibious invasion of Guadalcanal, and in Europe landed in Italy and France and moved into Germany. On September 8, 1943, Italy surrendered, April 30, 1945; Hitler takes his own life, followed by the surrender of Germany on May 7, and after atomic bombs I are dropped on Hiroshima and Nagasaki, Japan surrenders on September 2, 1945. World War Two affected not only the United States, but the whole world also. The war cost more money, damaged more property, and killed more people than any other war in history. Those that were lucky enough to return home with their life were forever changed in an unimaginable way. The war also opened the door to a new kind of warfare. Not only was the Atomic Age born, but aircraft, warships, and ground forces now worked together with split-second timing to carry out attacks. Bombers and guided missiles along with paratroopers brought death from above. It is impossible to calculate the number of wounded, missing, and killed between September 1939, and September 1945. An estimated 9,000,000 Allied, and 6,000,000 Axis servicemen lost their lives in the war. ...read more.

Peace talks began in Paris in May '68, but accomplished nothing. Four years later, on March 30, 1972, North Vietnam began a full-scale invasion of South Vietnam. In retaliation, President Richard Nixon, ordered a new air campaign. Operation Linebacker, which attacked targets like the rail line leading from China, was now underway. By the end of June, the enemy had been stopped, allowing American troops to be extracted from South Vietnam. South Vietnam also regained the city of Quang Tri. The losses on both sides in 1972 led to peace talks and a cease-fire. All American troops along with POWs returned home. However, soon after, North Vietnam invaded South Vietnam seizing Saigon on April 30, 1975, renaming it Ho Chi Minh City. Many wonder if Vietnam was worth the cost. America had invested more than 150,000,000,000 dollars in the war. More than 50,000 Americans were dead and 200,000 lay wounded. The United States had torn itself apart over this conflict. Demonstrations, especially the Kent State riot, had caused deep wounds. The United States had lost support throughout the world and in some circles; old friends and allies were driven away as the war continued. The United States entered the conflict to demonstrate her determination to fight communist expansion, but perhaps the cost was too high. However, if lessons have truly been learned and the mistakes are not repeated, then perhaps, it was not all in vein. 1 ...read more.