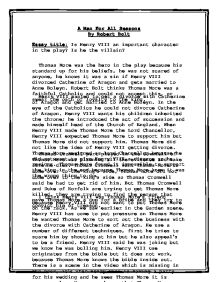 Man For All Seasons By Robert Bolt - Is Henry VIII an important character in the play? Is he the villain?

A Man For All Seasons By Robert Bolt Essay title: Is Henry VIII an important character in the play? Is he the villain? Thomas More was the hero in the play because his standard up for his beliefs, he was not scared of anyone, he knows it was a sin if Henry VIII divorced Catherine of Aragon and gets married to Anne Boleyn. Robert Bolt thinks Thomas More was a faithful Catholic and could not accept this, or swear the oath of loyalty to the king. Henry VIII wanted to get a divorce with Catherine of Aragon and get married to Anne Boleyn. ...read more.

I think the real villain in this book was Richard Rich because it was impossible to get Thomas More in prison when Thomas Cromwell tried. Richard Rich lied to get Thomas More killed but Thomas Cromwell is the villain as well but Richard Rich is the biggest villain. The audiences enjoy the trial scene because it has suspense, and is also interesting. The king was not present at the trail. The scene at the end when Thomas More got executed was very sad and dramatic but not thrilling. I thought there will be blood but actual the beheading was not shown. By Amandeep Singh Dhillon 10t 25/01/03 ...read more.