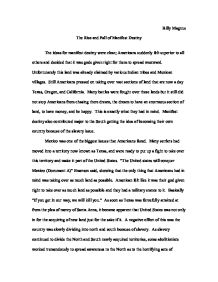 Billy Magnus The Rise and Fall of Manifest Destiny The ideas for manifest destiny were clear; Americans suddenly felt superior to all others and decided that it was gods given right for them to spread westward. Unfortunately this land was already claimed by various Indian tribes and Mexican villages. Still Americans pressed on taking over vast sections of land that are now a day Texas, Oregon, and California. Many battles were fought over these lands but it still did not stop Americans from chasing there dream, the dream to have an enormous section of land, to have money, and be happy. This is exactly what they had in mind. Manifest destiny also contributed major to the South getting the idea of becoming their own country because of the slavery issue. Mexico was one of the biggest issues that Americans faced. ...read more.

A negative effect of this was the country was slowly dividing into north and south because of slavery. As slavery continued to divide the North and South newly acquired territories, some abolitionists worked tremendously to spread awareness to the North as to the horrifying acts of slavery. Yet, as clearly stated in Article D, "The people of the North, [who were trying to be convinced that slavery was evil] were unwilling to do anything about the institution of slavery, [except] oppose to the expansion of slavery into the western territories". Slavery was one thing that was not benefiting from manifest destiny at all; in fact, the expansion of territories in the south was just another call for more slaves. Southerners at this time were willing to gain more slave states at all costs. ...read more.

As Americans moved into California by the thousands the Indians have no where to go. Most of the Indians were killed and by 1849, 80% of the population of California was American. After vigorously taking over California, the issue of slavery came up again making many people nervous on how this issue would be settled. This is another reason that manifest destiny almost ripped apart the country. Instead the positive and productive effects that Manifest Destiny was supposedly thought to bring to America, it only brought hardship, and controversy. It was thought to be the only productive way of fulfilling "Gods will to expand America's boundaries", the expansion came at the cost of America's stability as a rising nation. Differing views between the Northerners and Southerners would soon lead to the Civil War costing of many American lives and throwing the country into a state of total confusion to the whereabouts it was headed as a nation. ...read more.