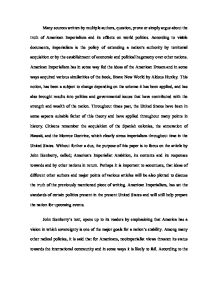 Many sources written by multiple authors, question, prove or simply argue about the truth of American Imperialism and its effects on world politics.

Many sources written by multiple authors, question, prove or simply argue about the truth of American Imperialism and its effects on world politics. According to viable documents, imperialism is the policy of extending a nation's authority by territorial acquisition or by the establishment of economic and political hegemony over other nations. American Imperialism has in some way fed the ideas of the American Dream and in some ways acquired various similarities of the book, Brave New World by Aldous Huxley. This notion, has been a subject to change depending on the scheme it has been applied, and has also brought results into politics and governmental issues that have contributed with the strength and wealth of the nation. Throughout times past, the United States have been in some aspects suitable father of this theory and have applied throughout many points in history. Citizens remember the acquisition of the Spanish colonies, the annexation of Hawaii, and the Monroe Doctrine, which clearly stress imperialism throughout time in the United States. Without further a due, the purpose of this paper is to focus on the article by John Ikenberry, called; America's Imperialist Ambition, its contents and its responses towards and by other nations in return. ...read more.

It is a fact that throughout history and present days, the United States has been a nation of high prospects and clear ideals. There have been many events during times past, that have marked many American Ideas and influenced many other lands. Everything started in 1898 during the Spanish American war, when the United States entered a world of capitalism and control over many colonies such as Cuba and Puerto Rico (Lovestone, n.pag). Other major conquests in the Pacific Ocean were Hawaii, the Philippines (temporarily) and Guam. These islands served as gateways for markets and commerce and the United States paid fortunes for these islands (Lovestone, n.pag). One of the main conquests made by the United States which I feel highly connected to, was the acquisition of the Panama Canal zone when the strip separated from Colombia in 1903. The United States, acquired control of the Canal for many years, until 2000, when the Panamanian government actually took over the zone and its administration (Lovestone, n.pag). These actions throughout history were largely related to Americas Imperialist Ambition and to some of the goals of the nation to spread spheres of influence, while maintaining sovereignty and protection in their lands. ...read more.

Going back to the past, European nations had much more powerful militias than the one in the United States. Probably, now a days, this powerful nation does have the most powerful militia, I don't know, but I think that this statement is arrogant and out of context. Europe is a powerful nation and it started Imperialist Ideas in many ways and worldwide events. Clearly, the reader has settled differences from the author and its text, based on alternate articles and historical facts. The United States has consecrated as one of the world's most powerful nations and a burly power. It has shed many imperialist ideas, and continues with ambition in order to preserve security, fight terrorism and protect the sovereignty of its citizens. In the present America is a fearful nation facing destiny with new technological inventions and vanguard devices. Hence, going back to the roots of the dilemma, Europe is a strong fearful power, known as the father of imperialist ambition and many postulates that go along with it. Day after day, the European Community is gaining strength, unity and equilibrium and by any moment, it will be ready to strike, not as a terrorist measure, but in self-defense and protecting its sovereignty and stableness. Each nation possesses its differences, but both are major powers and they also want to attack terrorism and acquire safeness, through some imperialist measures. ...read more.