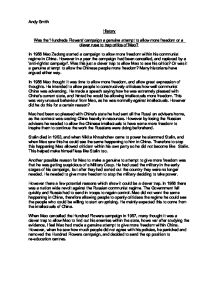 However by losing the Russian advisers he needed to allow the Chinese intellectuals to have some more freedom to inspire them to continue the work the Russians were doing beforehand. Stalin died in 1953, and when Nikita Khrushchev came to power he slammed Stalin, and when Mao saw this he could see the same happening to him in China. Therefore to stop this happening Mao allowed criticism within his own party so he did not become like Stalin. This helped make himself less like Stalin too. Another possible reason for Mao to make a genuine to attempt to give more freedom was that he was getting suspicious of a Military Coup. ...read more.

The Government fell quickly and Russia had to send in troops to regain control. Mao did not want the same happening in China, therefore allowing people to openly criticises the regime he could see the people who could be willing to start an uprising. He mainly expected this to come from the intellectuals of China. When Mao cancelled the Hundred Flowers campaign in 1957, many thought it was a clever trap to allow Mao to find out his enemies within the state, however after studying the evidence, I feel Mao had made a genuine attempt to give more freedom within China. However, when he saw how much people did not agree with his policies, he panicked and removed the Hundred Flowers campaign, and decided to send the opposition to re-education centres. Andy Smith ...read more.