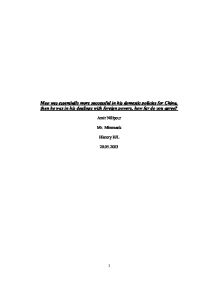 Mao was essentially more successful in his domestic policies for China, then he was in his dealings with foreign powers, how far do you agree?

Mao was essentially more successful in his domestic policies for China, then he was in his dealings with foreign powers, how far do you agree? Amir Nilipour Mr. Mimmack History H/L 20.05.2003 After Mao had defeated the Nationalists he was aware of the instability of communism in china. He aimed of stabilizing china by dividing it into six main regions also called the Organic Law of 1949, each was governed by a Bureau including four major officials : Chairman, party secretary, military commander and political commissar. The last two officials were members of the PLA, which effectively left china under army control but also Mao hoped that through these actions he would be able to stabilize communist China. Nevertheless, Mao had to adopt force in order to control china. Since Mao had send his officials also in regions in which communism was not welcome. After one year fighting Mao's aims were fulfilled, but the price given for it was high. Marriage reform law paragraph During the early 1950's Mao wanted to divide land which were owned by the Landlords to his peasants. Again the price paid in order to fulfil the Agrarian reform Law was very high, because of the hatred between the working class and the landlords over one million landlords were killed, and their land was divided to the working class. The amount of land received varied with the location of the land. The land given to the peasants was used for two main things: Planting of food which was used by the individual and a percentage of the harvest was given away to the CCP. ...read more.

The leader of the CCP was Deng Xiaoping. Both adopted more pragmatic economic policies which made approaches to better and strengthen the disastrous economic situation as well as the social organisation in China after the fail of the GLF. These ruling - styles were totally different than those of Mao, who realized that and called for an Cultural revolution in 1965. It was designed to prevent the development of a bureaucratisation Soviet-style of Communism. In the earlier stages of Maos domestic policy him and his National minister Lin Bao, who also replaced Liu Shaoqi wrote the "Little red book", in which Maos philosophy and his view of communism was given. Deng and other political leaders who lost their positions due to radical youth movements which they brought to existence. These movements rivalled against movements that did not follow Maoist life. One of the first victims was Peng Dehuai, in 1967 he lost his governmental post and was arrested and was never seen again. Zhou Enlai was also a victim of the red guards, even though he supported the Great Leap forward and the Cultural revolution, still he gave shelter to victims of the red guards, but therefore he was attacked periodically. It was not only the red guards, but also other groups which formed, which Mao called to " smash the four olds", the old ideas, old culture, old costumes and old habits. Soon many schools were closed and many "intellectuals" were followed and killed. ...read more.

The Indian deployment was spread over a large area. Logistics were difficult to maintain, since the road network was poor. Hostilities began on October 16, 1962. The Chinese stated that they were responding to Indian provocations. On October 20, 1962, the Chinese People's Liberation Army launched two coordinated in the Chip Chap valley in Ladakh and the Namkachu river. After securing a substantial portion of the disputed territory, the Chinese made an offer to negotiate . The Indian government rejected this offer. By November 18, the Chinese had penetrated close to the outskirts of Tezpur, Assam, a major frontier town nearly fifty kilometres from the Assam-North-East Frontier Agency border. The Chinese did not advance farther and on November 21 declared a unilateral cease-fire. The United States Air Force flew in massed supplies to India in November, 1962, but neither side wished to continue hostilities. The Nehru government also decided to assimilate several territories that they saw as a source of espionage and re-supply to potential enemies. Many Indians still regard the territorial acquisitions as an illegal occupation, and for this reason proposals to formalize the border at the line of actual control have proven impossible to implement. However, neither the Indian nor the Chinese government appear very interested in disturbing the status quo, and the disputed boundary, called by Indians the Line of Actual Control is not considered a major flashpoint. Military commissions from India and China meet regularly in the capitals of both countries to discuss the status of the border. Sino Soviet Split (p.24) PLA in Cambolia 1975 Hong Kong Maariage reform law success ...read more.