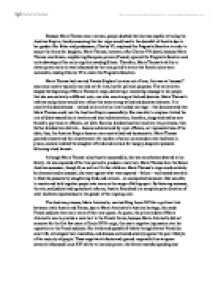 Because Maria Theresa was a woman, people doubted that she was capable of ruling the Austrian Empire, thereby assuming that her reign would lead to the downfall of Austria due to her gender. Her father and predecessor, Charles VI, emplaced the Pragmatic Sanction in order to secure the throne for daughter, Maria Theresa; however, after Charles VI's death, because Maria Theresa was female, neighboring European powers (Prussia) ignored the Pragmatic Sanction and took advantage of her early reign by invading Silesia. Therefore, Maria Theresa's ability to obtain power early on was influenced by the time period's notion that female rulers were vulnerable, leading Charles VI to create the Pragmatic Sanction. Maria Theresa had married Francis Stephen Lorraine out of love; this was an "unusual" case since royalty typically married not for love, but for political purposes. ...read more.

now forced to pay taxes to officials, not diets She also divided Austrian land into ten provinces, then further divided into districts - became administered by royal officials, not representatives of the diets; thus, the Austrian Empire became more centralized and bureaucratic. Maria Theresa granted amnesty and the reinstatement of a number of senior commanders who had been in prison, and she ordered the slaughter of birds and animals for hungry, desperate peasants following a bad harvest. Although Maria Theresa ruled Austria successfully, she was nonetheless devoted to her family. As was expected of the time period to produce a male heir, Maria Theresa bore the future Austrian successor, Joseph II, as well as 15 other children. ...read more.

As queen, the primary duty of Maria Antoinette was to provide a male heir to the French throne; because Maria Antoinette did not conceive for the first few years of Louis XVI's reign, this cast a negative impression over her reputation to the French subjects. Her lavish and spendthrift habits through blatant Versailles court-life, extravagant hair ensembles, and dresses contrasted severely against the poor lifestyle of the majority of people. These negative attributes and ignored responsibilities as queen severely influenced Louis XVI ability to exercise power; the blatant wasteful spending and ignored responsibilities to bear children casted a negative impression over King Louis XVI, causing people to distrust and resent the French monarchy. This in turn would catalyze the French Revolution and downfall of the French regime. ...read more.