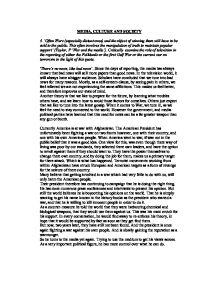 MEDIA, CULTURE AND SOCIETY 4. 'Often Wars (especially distant ones) and the object of winning them will have to be sold to the public. This often involves the manipulation of truth to maintain popular support' (Taylor, P 'War and the media'). Critically examine the role of television in the reporting of either the Falklands or the first Gulf War or the current war on terrorism in the light of this quote. 'There's no news, like bad news'. Since the days of reporting, the media has always known that bad news will sell more papers than good news. In the television world, it will always have a bigger audience. Scholars have concluded that we tune into bad news for many reasons. Mostly, as a self-esteem clause, by seeing pain in others, we feel relieved we are not experiencing the same afflictions. This makes us feel better, and therefore improves our state of mind. Another theory is that we like to prepare for the future, by learning what troubles others have, and we learn how to avoid those factors for ourselves. Others just expect that we like to tune into the latest gossip. ...read more.

While he could get out his own message on this medium as well, it was just one voice in a crowd of millions, which quickly got swallowed up. This free form of public press also opened itself to lies and criticisms, which damaged the political parties involved. It was also the place newspapers could tell the story; they were not allowed to do in print. The military also feared the Internet, thinking that it would give the enemy access to our plans, strategies and general war tactics. But this is not the first time that the military has feared these outlets. Back in World War two, Britain decided to close down all TV station broadcasts for the duration of the war, believing that the enemy could use the signal as a locater, and 'home' in on it, to target their bombs. So as a military defence, they stopped all but the emergency radio broadcasts. In this war, the military, or 'the pentagon', as they are known as, bought up all access to all commercial satellite photographs of the region, preventing any news outlets from obtaining them. ...read more.

But who won? The politicians or the media? In my opinion, I would say the politicians. They were one step ahead at all times. They controlled the satellite surveillance from day one, only allowing journalist to see what they wanted them to see. The reporters that went into the field, had to be accompanied by government-trained soldiers, who would control where they went, and what they were likely to see. After the war, Blair and Bush manipulated the media hounds so that being hounded by constant cameras became an aid for them, rather than for the journalist. They took what was normally negative situation, and turned it into a positive spin. We only saw what they wanted us to see. They manipulated our viewing to remove the emphasis that we were invading a country that was ant attacking us. They have kept vital details of interest secret, such as the number of Civilians killed during the war, and the amount in tax money spent on funding it. This is not the first time that Broadcasting has been used for political opinion, and it will definitely not be the last. I would like to leave with this final quote from Sharif Hikmat Nashashibi, chairman of Arab Media Watch who reported on the yelowtimes.org website (Oct 22ND 2003), which I believe fits quite well. ...read more.