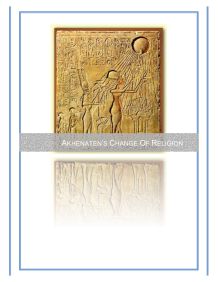 menhotep IV changed his name Akhenaten and began a revolutionary period in Egyptian history called the Amarna Period.[1] Although this period lasted only a relatively short time, it had a profound impact on Egyptian civilisation.

Why did Akhenaten, originally Amenhotep (IV), choose? Experts all over the world have been puzzled with this occurrence. Why did he do such an act, and how did this affect his power, the length of his reign and above all, his people. It amazes me that someone can turn his back on what his predecessors had done thousands of years before him; this essay has been created to show you an in-depth explanation on why Akhenaten chose monotheism over polytheism. Amenhotep IV changed his name Akhenaten and began a revolutionary period in Egyptian history called the Amarna Period.1 Although this period lasted only a relatively short time, it had a profound impact on Egyptian civilisation. The nature of Akhenaten's revolution is well established--he overthrew Egyptian polytheism in favour of the worship of a single god, Aten, but the reason behind it is still unknown. ...read more.

Akhenaten introduced a new religion to Egypt. Akhenaten only worshipped one god who was Aten which translated to the light that was in the sun. This light was believed to provide life for the Earth and to keep it alive.4 This new god was depicted as a sun disk emanating rays that ended in hands, and in order to worship the Aten, Akhenaten had a new type of temple constructed, these of which resembled the sun temples of the Fifth Dynasty (2500-2350 B.C.E) nearly 1,000 years earlier. These temples consisted of a series of open courts oriented towards the east so when the sun rises the rays illuminate the centre of the altar. Such temples were built at Thebes, Memphis, Heliopolis, and of course, Akhenaten. He attacked the cults of other deities in Egypt, especially Amon. Sites of Amon were desecrated and any evidence of worship to this god destroyed. ...read more.

Akhenaten died in his 17th year as Pharaoh, and without him his religious movement fell apart. He was succeeded by Tutankhaten (popularly known as "King Tut"), who may have been his son. Tutankhaten changed his name from Tutankhaten, which means "living image of Aten," to Tutankhamun, which means "living image of Amun," and reversed the religious revolution, restoring the old order. 8 It cannot be denied that Amenhotep IV or Akhenaten as he is more widely known had a very large and significant impact on Egyptian religion and art during his reign as pharaoh. The effects and impacts of his reign spread across many aspects of Egyptian life and ranged from the art of Akhenaten and to religion and the Cult of Aten to building at this period but clearly, his changes were not well met by the ancient Egyptians and their refusal to his heresy, upon his death, was quick. 1 http://www.touregypt.net/featurestories/amarnaperiod.htm 2 http://www.heptune.com/Akhnaten.html 3 http://www.ancient-egypt-online.com/facts-on-akhenaton.html 4 http://encyclopedia.jrank.org/articles/pages/114/Akhenaten.html 5 http://www.kingtutone.com/akhenaten/ 6 http://www.ancient-egypt-online.com/facts-on-akhenaton.html 7 http://www.touregypt.net/featurestories/amarnaperiod.htm 8 http://egyptian-history.suite101.com/article.cfm/the_pharaoh_akhenaten ?? ?? ?? ?? ...read more.