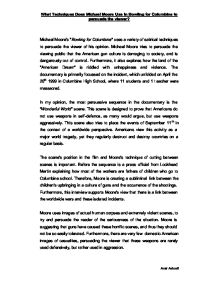 Michael Moore's "Bowling for Columbine" uses a variety of satirical techniques to persuade the viewer of his opinion. Michael Moore tries to persuade the viewing public that the American gun culture is damaging to society, and is dangerously out of control. Furthermore, it also explores how the land of the "American Dream" is riddled with unhappiness and violence. The documentary is primarily focussed on the incident, which unfolded on April the 20th 1999 in Columbine High School, where 11 students and 1 teacher were massacred. In my opinion, the most persuasive sequence in the documentary is the "Wonderful World" scene. This scene is designed to prove that Americans do not use weapons in self-defence, as many would argue, but use weapons aggressively. This scene also tries to place the events of September 11th in the context of a worldwide perspective. Americans view this activity as a major world tragedy, yet they regularly destruct and destroy countries on a regular basis. The scene's position in the film and Moore's technique of cutting between scenes is important. Before the sequence is a press official from Lockhead Martin explaining how most of the workers are fathers of children who go to Columbine school. ...read more.

Once again, the viewer is provided with a link between the international climate of destruction and small seemingly insignificant events like Columbine. Moore uses a CCTV-style technique to present this scene, instead of a reconstruction, which seems rather unconventional. This is extremely effective on many levels, as the reader associates this scene with popular programmes depicting criminal activity. Furthermore, this scene creates a sense of the realness and panic. As a result, the viewer is persuaded of Moore's view that guns should be banned if this is their consequence. At the end of the scene we are presented with images of grieving students, which makes us feel very empathetic in supporting their cause against guns. As well as unusual visual techniques, Moore also uses unusual audio styles. The music in the background is sombre which reflects upon the reader, and is intensified by the actual dialogue of police calls, such as a father asking where he could find his daughter. These calls give a sense of immediacy and reality, and help show how serious the events actually were. At the end of the sequence, Moore reads a voice over where he explains how "over 900 rounds" of ammunition were used and that the guns were all bought legally. ...read more.

He uses phrases like "they," "most people" and "liberals contend" to distance himself from their arguments. The tone is facetious in this scene, as the comments during the bowling part are irrelevant and mildly humorous; and this is emphasised by the music illustrating the insanity of the figures. The overall impact Moore tries to create is that gun availability in America is morally wrong, and can be blamed for violence, such as those scenes seen in Columbine. He makes us feel that the gun situation is out of control and we are persuaded that the American view on guns is wrong. In conclusion, Michael Moore is successful in persuading the viewer of his beliefs, using a dangerous combination of facts and opinions. The opinions and facts are so closely related and placed together, that it is difficult for the viewer to differentiate between them. He uses vivid and intelligent visual and audio to complement his sarcastic and powerful argument against the legality of gun ownership. Overall, the documentary has a powerful effect upon the viewer, persuading them that rather than prevent violence, guns are merely a cause of unnecessary deaths and pain. ?? ?? ?? ?? What Techniques Does Michael Moore Use in Bowling for Columbine to persuade the viewer? Amir Ashrafi ...read more.