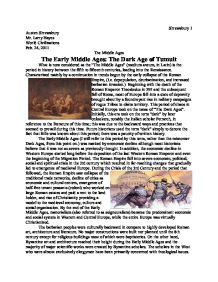 Shrewsbury 1 Austen Shrewsbury Mr. Larry Hayes World Civilizations Feb. 24, 2011 The Middle Ages The Early Middle Ages: The Dark Age of Tumult What is now considered as the "The Middle Ages" (medium aveum, in Latin) is the period in history between the fifth to fifteenth centuries, leading into the Renaissance. Characterized mainly by a continuation in trends begun by the early collapse of the Roman Empire, (i.e. depopulation, deurbanization, and increased barbarian invasion.) Beginning with the death of the Roman Emperor Theodosius in 395 and the subsequent fall of Rome, most of Europe fell into a state of depravity brought about by a foundroyant rise in military campaigns of rogue Tribes to claim territory. This period of chaos in Central Europe took on the name of "The Dark Ages". Initially, this era took on the term "dark" by later onlookers, notably the Italian scholar Petrarch, in reference to the literature of this time; this was due to the backward ways and practices that seemed to prevail during this time. Future historians used the term "dark" simply to denote the fact that little was known about this period; there was a paucity of written history. The Early Middle Ages (I will refer to this period by this term, rather than the misnomer Dark Ages, from this point on.) ...read more.

At the Council of Clermont, Pope Urban II called for the Crusade against the Muslims who had occupied the Holy Land and were attacking the Byzantine Empire and gave a cloth crosses to the knights to be sewn into their armor which gave the Crusades their name. This brings us to the next topic at hand, Knights and their code of Chivalry; which are one of the most famous developments of the middle ages. Medieval knights were mounted warriors who held land in return for military service. Originally, the title of a knight could have been earned exclusively through military achievements and some knights originated from the lower classes of medieval society. However, eventually the knights could became only male descendants of knighted men, while knightly families became regarded as noble. Despite that the title of a knight could not be inherited and every noble had to go through a long process before becoming a knight. The process of becoming a knight started in early childhood usually around age of 7 or 8 years when a boy was sent to his lord's household where he started his training to become a knight. The boy served as a page, kind of waiter and personal servant to his elders from about of 7 to 14 years of age. Page was also taught knightly virtues and conduct as well as battle techniques. ...read more.

Besides struggles for supremacy with secular rulers the Church also put a lot of effort to prevent priestly marriages and simony (purchase of church offices). First major step towards introduction of celibacy of the clergy was made by Pope Gregory VII by publishing an encyclical which absolved the people from their obedience to bishops who allowed priestly marriages. However, the compulsory celibacy of the clergy and ban of priestly marriages was formally introduced with the First Lateran Council in 1123. That way the Roman Catholic Church avoided an eventual division of the land and heritable offices in case if married clergymen produced heirs. The Christian and church doctrine had an absolute "monopoly" over mentality of all classes of feudal society during the period of highly developed feudalism. Any theological or religious opinion which opposed to the official churchly doctrine was considered heretic and was persecuted, while religious believes dominated in all aspects of a life of a Christian. However, the Papacy slowly lost its power to the national monarchs by the 14th century which became obvious after the influence of many reformers, some even priests themselves. One such notable contrary individual is Martin Luther, a priest who posted his Ninety-Five Thesis on the walls of the castle-church in Wittenburg, Germany. This created separation in the thoughts of the people and the Roman Catholic Church, eventually leading to the Protestant Reformation; setting the stage for the Renaissance. ...read more.