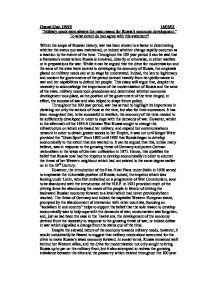 &quot;Military needs were always the main reason for Russia's economic development&quot; - To what extent do you agree with this statement?

Dhaval Shah U6NE 14/05/03 "Military needs were always the main reason for Russia's economic development." To what extent do you agree with this statement? Within the scope of Russian history, war has been shown to a factor in determining whether the status quo was maintained, or indeed whether change rapidly occurred as a reaction to the events of the time. Throughout the 100 year period it can be said that a framework exists where Russia is involved, directly or otherwise, in either warfare or in preparations for war. Whilst it can be argued that the drive for modernisation and the aims of the state were central to developing the economy of Russia, the emphasis placed on military needs can at no stage be understated. Indeed, the key to legitimacy and consent for governments of the period derived heavily from her performance in war and her capabilities to defend her people. This essay will argue that, despite the necessity to acknowledge the importance of the modernisation of Russia and the aims of the state, military needs took precedence and determined whether economic development took place, as the position of the government of the time hinged, in effect, the success of war and also helped to shape future policy. ...read more.

to support the belief that the sole reason to develop economically was to help cope with the demands of war; consumerism was forgotten, and, just as had been the case in the Tsarist era, the development of the economy derived from the necessity to response to the growing threat of war, or indeed defeat in war which signalled a change from the status quo of the time. Despite the skewed nature of the economy towards military needs, however, it would undoubtedly be flawed to suggest that military needs alone accounted for the drive to move Russia's weak economy forward. In social terms, Russia remained well behind her Western allies, and the drive for modernisation not only sought to bring Russia up to par on the military front, but it also attempted to redress the growing imbalance between the elite and the peasantry which existed throughout the 100 year period. The programme of reform embarked upon by Alexander II in the 1860s signalled his intentions to alleviate the growing discontent of his people, whilst also developing Russia economically so that the social structure of Russia could be maintained. ...read more.

The imbalance in caused by the skew towards heavy industry meant that the Russian people lived with little purpose; he sought to redress this quickly and firmly. Despite this, what the 100 year period has shown is that, whilst leaders under both the Tsarist and Communist era had differing aims and objectives, the effect of war as a catalyst for change economically has been a consistent theme that has recurred time after time. The belief that the effect of war provided the impetus for the need to develop economically can be qualified that, after several of the major wars that Russia was involved in within the 100 year period, there had been calls at the time to change and develop the infrastructure in the aftermath, most notably when Russia had fallen at the hands of the victors. Indeed, counterfactually speaking, there would have been no requisite need to develop had Russia's military capacity been sufficient enough to deal with the matters she faced at the time. The fact that the legitimacy of government hinged to such an extent on success in war meant that, in effect, Russia had no choice but to be biased economically towards the needs of the military; essentially, she was an isolated state with nothing to gain, but everything, as her leaders perceived, to lose. ...read more.