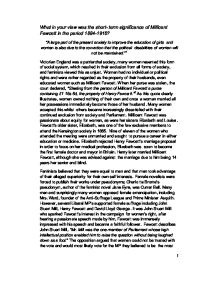 What in your view was the short- term significance of Millicent Fawcett in the period 1884-1916? "A large part of the present anxiety to improve the education of girls and women is also due to the conviction that the political disabilities of women will not be maintained."1 Victorian England was a patriarchal society, many women resented this form of social system, which resulted in their exclusion from all forms of society, and feminists viewed this as unjust. Women had no individual or political rights and were rather regarded as the property of their husbands, even educated women such as Millicent Fawcett. When her purse was stolen, the court declared, "Stealing from the person of Millicent Fawcett a purse containing �1 18s 6d, the property of Henry Fawcett."2 As this quote clearly illustrates, women owned nothing of their own and once a woman married all her possessions immediately become those of her husband. Many women accepted this whilst others became increasingly dissatisfied with their continued exclusion from society and Parliament. Millicent Fawcett was passionate about equity for women, as were her sisters Elizabeth and Louise. Fawcett's older sister, Elizabeth, was one of the few exclusive members to attend the Kensington society in 1865. Nine of eleven of the women who attended the meeting were unmarried and sought to pursue a career in either education or medicine. Elizabeth rejected Henry Fawcett's marriage proposal in order to focus on her medical profession, Elizabeth was soon to become the first female doctor and mayor in Britain. ...read more.

However, Fawcett believed that if women were granted the right to vote it would result in prostitution reducing. Millicent Fawcett began to help Josephine Butler in her campaign against the white slave traffic. Fawcett supported Butler's belief that the government should take action to reduce prostitution within Britain and was particularly concerned with the issue of child prostitution, she demanded an increase in the age of consent from twelve to sixteen.. In 1885, William Stead and Bramwell Booth members of the Salvation Army worked together in order to expose the availability of and growth in child prostitution. In July 1885, Stead purchased a thirteen year- old girl, Eliza Armstrong, for the amount of �5. Stead proved how easy it was to lure young girls into prostitution. Due to the amount of publicity generated by the Armstrong affair, Parliament passed the Criminal Law Amendment Act which successfully raised the age of consent from thirteen to sixteen. Fawcett also supported Clementina Black with her attempts at persuading the government to grant women equal payment with men; equal pay for equal work. After her husband's death Fawcett became involved with the Personal Rights Association, which took an active role in exposing men who preyed on vulnerable young women. In 1886, unlike her character, she became a participant in a physical assault on an army major who had been harassing a servant of a friend of hers. ...read more.

It was not until March 1928 that Britain became a universal emancipated and therefore a fully democratic country; it was during the nineteenth century that Britain had begun to change from being ruled by the elite, who were, historically, the only group represented in Parliament - the elitist rule at the expense of the poor. Cynics of the suffrage had witnessed for ten years that women could be trusted with the vote, this resulted in a bill being introduced in March 1928 to give women the right to vote on the same terms as men. There was little opposition in Parliament towards the bill and it became law on 2nd of July 1928. Women gained the right to vote mainly because of their efforts on the Home Front during World War One. Millicent Fawcett was the most prominent figure within the suffrage movement, President of the most politically mature pressure group with 100,000 members, she achieved more than any other individual in regards to securing political involvement for women within Parliament. Many leading figures of the suffrage died before achieving political equality including; Elizabeth Garret Anderson, Emmeline Pankhurst and Josephine Butler. Millicent Fawcett had the divine privilege to witness the vote and later that night she wrote in her dairy, "It is almost exactly 61 years ago since I heard John Stuart Mill introduce his suffrage amendment to the Reform Bill on May 20th, 1867. So I have had extraordinary good luck in having seen the struggle from the beginning." 5 ?? ?? ?? ?? 1 ...read more.