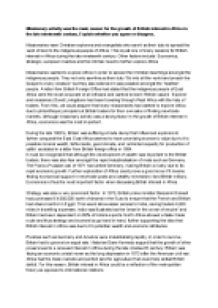 Missionary activity was the main reason for the growth of British interest in Africa in the late nineteenth century. Explain whether you agree or disagree.

Transfer-Encoding: chunked ﻿Missionary activity was the main reason for the growth of British interest in Africa in the late nineteenth century. Explain whether you agree or disagree. Missionaries were Christian explorers and evangelists who saw it as their duty to spread the word of God to the indigenous people of Africa. This is just one of many reasons for British interest in Africa during the late nineteenth century. Other factors include: Economics, strategic, european rivalries and the intrinsic need to further explore Africa. Missionaries wanted to explore Africa in order to spread the Christian teachings amongst the indigenous people. They not only saw this as their duty ?Go into all the world and preach the Gospel to every creature? but they also believed it was possible amongst the ?heathen? people. ...read more.

It must be recognised that although the development of wealth was important to the British traders, there was also fear amongst the rapid industrialisation of rivals such as Germany. The Franco-Prussian war of 1871 had united Germany, making Britain a rivalry due to its rapid economic growth. Further exploration of Africa could prove a good move if it means finding economical support in new trade posts and wealthy minerals to fund British military. Economics is thus the most important factor when discussing British interest in Africa. Strategy was also a very prominent factor. In 1875, British prime minister Benjamin Disraeli had purchased £4,000,000 worth of shares in the Suez to ensure that the French and British had shared control in Egypt. ...read more.

Africa had the trade markets and perfect land for agriculture that could help defeat British deficit. For this reason, British interest in Africa could be a reflection of the metropolitan theory as opposed to international relations. The motivation to explore Africa could have been simply fueled by imperialists such as Cecil Rhodes who found fame and fortune in the South. Others would view this as a successful way to be rich and powerful while at the same time winning the respect and admiration of those at home. In conclusion, there are many factors for British interest in Africa during the late nineteenth century. However, the long depression meant that Britain had to focus on selling and competing with other products such as New Zealand butter and North American grain in order to survive. The only way to survive was to reach an economic equilibrium, the easiest way to do this was to expand in Africa. ...read more.