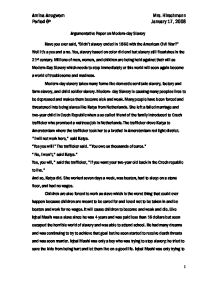 Argumentative Paper on Modern-day Slavery Have you ever said, "Didn't slavery ended in 1865 with the American Civil War?" Well it's a yes and a no. Yes, slavery based on color did end but slavery still flourishes in the 21st century. Millions of men, women, and children are being held against their will as Modern-Day Slavery which needs to stop immediately or this world will soon again become a world of troublesome and madness. Modern-day slavery takes many forms like domestic servitude slavery, factory and farm slavery, and child soldier slavery. Modern- day Slavery is causing many peoples lives to be depressed and makes them become sick and weak. ...read more.

Yes, you will," said the trafficker, "if you want your two-year old back in the Czech republic to live." And so, Katya did. She worked seven days a week, was beaten, had to sleep on a stone floor, and had no wages. Children are also forced to work as slave which is the worst thing that could ever happen because children are meant to be cared for and loved not to be taken in and be beaten and work for no wages. It will cause children to become and weak and die. Like Iqbal Masih was a slave since he was 4 years and was paid less than 16 dollars but soon escaped the horrible world of slavery and was able to attend school. ...read more.

These people have died but they died right, with honor and pride. This world is already madness enough and we shouldn't have more troublesome into this world. Modern- day slavery is just organized crime which the government should be taking care of. But why hasn't the government done anything. The government needs to start taking action. Poor defenseless people are out there being beaten down and are working for little wages. Color and ethnicity aren't the driving forces of modern-day slavery but are still important factors that should be stopped immediately. Human beings souls and bodies has been ravage which has caused people to become depressed and weakened. Even though the government should start taking action people of the world should start taking action and stop all slavery ONCE AND FOR ALL!!!! ?? ?? ?? ?? Amina Anugwom Mrs. Hirschmann Period 6th January 17, 2008 1 ...read more.