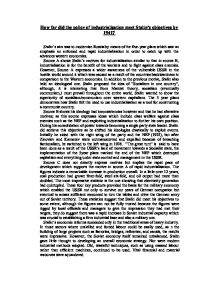 How far did the policy of industrialisation meet Stalins objectives by 1941?

How far did the policy of industrialisation meet Stalin's objectives by 1941? Stalin's aim was to modernise Russia by means of the five-year plans which saw an emphasis on enforced and rapid industrialisation in order to catch up with the advances western economies. Source A shows Stalin's motives for industrialisation similar to that in source B, industrialisation is for the benefit of the workers and to fight against class enemies. However, Source A expresses a wider awareness of the vulnerable USSR in the hostile world around it which was caused as a result of the countries backwardness in comparison to the Western economies. In addition to the previous motive, Stalin also held an ideological one. Stalin proposed the idea of "Socialism in one country", although,? ?it is interesting that? ?from Marxist theory,? ?socialism? ?(eventually communism,?) ?must prevail throughout the entire world. Stalin wanted to show the superiority of socialism/communism over western capitalism. ...read more.

These statistics suggest that Stalin did meet his objectives to some extent, although the figures can not be fully trusted because the figures were rigged by local officials and managers to give the impression they had met their targets, they do suggest there was a rapid increase in Soviet industrial capacity which was crucial to establishing a firm industrial base and also a military one. Stalin's economic reforms succeeded only in the traditional areas of heavy industry. In those sectors where unskilled and forced labour could be easily used, as n the building of large projects such as factories, bridges, refineries, and canals, the results were impressive. However, the Soviet economy itself remained unbalanced. Stalin gave little thought to developing an overall economic strategy. Nor were modern industrial methods adopted. Old, wasteful techniques, such as using massed labour rather than efficient machines, continued to be used. Vital financial and material resources were squandered. ...read more.

Yet whatever the hardship of the workers, the fact was that in 1941 the USSR was economically strong enough to engage in an ultimately successful military struggle of unprecedented duration and intensity. In Soviet propaganda, this was what mattered, not minor questions of living standards. The USSR's triumph over Nazism would later be claimed as the ultimate proof the wisdom of Stalin's enforced industrialisation programme. The historian Gattrell who built upon the argument of E.H. Carr acknowledged that Stalin was certainly severe and destructive in his treatment of people, but pointed out that the outcome of industrialisation was an economy strong enough to sustain the USSR through four years of the most demanding of modern wars. Hard though it may be for the Western liberal minds to accept, it may be that Russia could not have been modernised b any other methods except those used by Stalin. Therefore by implementing the policy of industrialisation the USSR was able to modernise and catch up to some extent with the more advanced Western economies, even if the methods were not the best planned or manoeuvred methods. ...read more.