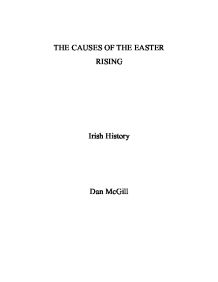 THE CAUSES OF THE EASTER RISING Irish History Dan McGill THE CAUSES OF THE EASTER RISING At noon on the 24th of April 1916, a thirty-seven year old school teacher Padraic Henry Pearse accompanied by armed rebel guards stood on the steps of the General Post Office (under the newly created Irish tricolour flag) in Sackville Street (now O'Connell St), Dublin, where he read a Proclamation on behalf of the seven members of the Irish Republican Brotherhood Military Council. Their objective was to achieve independence from Britain and to establish an Irish republic. The proclamation declared that the new Irish provisional government had been appointed and Ireland was free from foreign rule and it will guarantee the Irish people the pursuit of religious and civil liberty, and furthermore help find the happiness and prosperity for the people of Ireland. This militant Irish republican group believed the only way to achieve these objectives was by complete independence from Britain. Pearse, a member of the Irish Republican Brotherhood and the Irish Volunteers along with socialist James Connolly (founder of the Irish Citizens Army) were to be the leaders of the Easter Rising which was about to take place. The Easter Rising started on April 24th and lasted to April 30th, it was carried out by approximately 1,250 men and women, the ...read more.

The Irish Republican Brotherhood was secret organisations who were formed in 1858; they were direct descendants of the old fenians. It had financial Irish-American support, due to the huge number of immigrants in American as a result of the famine. It never had more than 2,000 members and their aim was to achieve Irish Independence. They created their own publication in 1910 called the Irish Freedom. The Irish Volunteers were formed in 1913 on the basis of the UVF forming. With the delay of Britain implementing Home Rule, it had recruited 180,000 men, but 11,000 split in 1914 in protest over the parties leader John Redmond's famous speech at Woodenbridge calling for nationalists to support Britain in the First World War. The Irish Citizens Army also formed in 1913 to protect strikers against police harassment. They consisted of 200 members (men and women) and their leaders were socialist James Connolly and former British Army Officer Jack White. On 26 July 1914, six days after the Curragh mutiny the Irish rebels also smuggled guns and ammunition on shore near Howth, a village north-east of Dublin,. The ammunition was immediately transported to places in the vicinity of Dublin. The guns were handed out among 1000 members of the Irish Volunteers. ...read more.

At the end of the uprising fifteen men were identified as leaders and executed in Kilmainham Jail. James Connolly was strapped to a chair unable to stand for the firing party, he then like the rest were then thrown into common graves in Arbour Hill Cemetery in hope that they would be forgotten. The decision by Major General John Maxwell, head of British rule in Ireland to execute the leaders caused major impact throughout Ireland at the time and still to this day ninety years later. His justification for his order was viewed on Irelands association with Germany and it would discourage any further risings. Citizens turned on the British after hearing of the barbaric executions and strengthened the predicted physical nationalism the leaders dreamt about. It has caused inspiration for republicans of today, their objectives being the same, similar methods such as the blood sacrifice were used during the 1981 hunger strike. Famous Russian Lenin stated publicly his admiration for Connolly and his comrades in their achievements much to the dismay of the British. This rising described romantically as "a poet's insurrection" despite only lasting six days paved the way for the Irish Free State six years later was the major turning point in Irish history. This is the battle they lost but it's the war they won in catapulting Ireland towards a new day of freedom. ...read more.