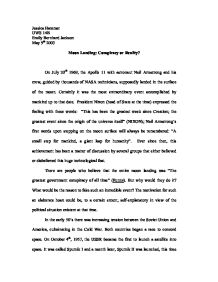 Jessica Hammer UWS 14B Emily Bernhard Jackson May 9th 2003 Moon Landing: Conspiracy or Reality? On July 20th 1969, the Apollo 11 with astronaut Neil Armstrong and his crew, guided by thousands of NASA technicians, supposedly landed in the surface of the moon. Certainly it was the most extraordinary event accomplished by mankind up to that date. President Nixon (head of State at the time) expressed the feeling with these words: "This has been the greatest week since Creation; the greatest event since the origin of the universe itself" (NIXON); Neil Armstrong's first words upon stepping on the moon surface will always be remembered: "A small step for mankind, a giant leap for humanity". Ever since then, this achievement has been a matter of discussion by several groups that either believed or disbelieved this huge technological feat. There are people who believe that the entire moon landing was "The greatest government conspiracy of all time" (Funny). But why would they do it? What would be the reason to fake such an incredible event? The motivation for such an elaborate hoax could be, to a certain extent, self-explanatory in view of the political situation existent at that time. ...read more.

In other words, in order for the camera to focus on the astronauts and moon surface, all bright images, the faint stars in the background would not show up at all. So the question wouldn't be why aren't there any stars in the sky? But, Why are there some at all? Another argument is based on the fact that in many of the photographs objects in shadows can be seen. For example, in figure number 2, area K, one side of the Lunar Module is covered in shadow but the symbol of the US flag is perfectly illuminated. Conspiracy theorists say that the only explanation for this phenomenon is multiple light sources: but they argue, the only light source on the moon would have been from the sun ("Great"). They claim that the absence of air molecules on the moon would not allow for the bending of light to illuminate an object in a shadow in the same way as on Earth, because of the atmospheric diffusion ("Photo"). Therefore, a shadow on the moon would be absolutely dark, and anything that happened to be in it could not be seen. The only problem in this point is that reflectivity is not considered by the conspiracy believers. ...read more.

After considering the process that surrounded the moon landing and the contrary points of views, it seems to me that the weight of the facts of American arrival on the moon are far more acceptable than the various details proposed by the backers of the conspiracy theory. Some doubts will still exist on what really happened on July 21st 1969, until space travel is accessible to everyone, it is still an exciting topic to discuss as Katie Couric conclude on her television show on ABC: "it's certainly an interesting notion and fun to talk about" Nevertheless, for both sides there are still unanswered questions and pending doubts: Why NASA's highest ranking official, James Webb, resign without explanation just days before the first Apollo mission, when he could have gained great success with NASA's greatest achievement? Or, why all three Apollo 11 astronauts also resign shortly after their return? (Funny) But probably most disturbing of all is the rare appearance and speech given by Neil Armstrong on the 25th Anniversary on 1994, when he told a group of astronauts, "To you we say we have only completed the beginning. We leave you much that is undone. There are great ideas undiscovered, great truths available to those who can remove truth's protecting layers". ...read more.