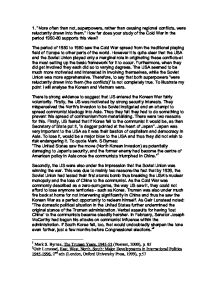 More often than not, superpowers, rather than causing regional conflicts, were reluctantly drawn into them.&quot; How far does your study of the Cold War in the period 1950-80 supports this view?

1. "More often than not, superpowers, rather than causing regional conflicts, were reluctantly drawn into them." How far does your study of the Cold War in the period 1950-80 supports this view? The period of 1950 to 1980 saw the Cold War spread from the traditional playing field of Europe to other parts of the world. However it is quite clear that the USA and the Soviet Union played only a marginal role in originating these conflicts-at the most setting up the basic framework for it to occur. Furthermore, when they did get involved they each did so to varying degrees. The USA seemed to be much more motivated and interested in involving themselves, while the Soviet Union was more apprehensive. Therefore, to say that both superpowers "were reluctantly drawn into them (the conflicts)" is not completely true. To illustrate my point I will analyse the Korean and Vietnam wars. There is strong evidence to suggest that US entered the Korean War fairly voluntarily. Firstly, the US was motivated by strong security interests. They misperceived the North's invasion to be Soviet instigated and an attempt to spread communist ideology into Asia. ...read more.

Thus Truman felt he had to prove them wrong by taking a harder approach against communism. Also, the US felt that the loss of Vietnam would put a strain of the security of not only Japan but the whole Eastern Pacific which included countries such as Australia and India. Very much in tangent with this, is concerns over the domino theory (invented during this time), where the US believed that if Vietnam fell so would the countries around it, and then the countries around those countries and so on. Thus, they felt they had to stop this communist expansion before it got out of hand. John W. Mason tell us in his book, "The Cold War 1945-1991", that: The Eisenhower administration saw Ho Chi Minh as an instrument of international communism and claimed that the loss of Indochina would have a disastrous effect on the rest of South-east Asia. The domino theory-later to be ridiculed by critics of the Vietnam War-was born."3 Furthermore, US were not only motivated by strategic concerns but also political and economic ones as well. Firstly, US wished to help France, so as to build upon already present friendship and obtain French support in NATO. ...read more.

Perhaps the most important point which shows how reluctant the Soviet Union was in getting involved in the war was the fact that pressed for a quick and peaceful end to it. They got involved due to obligation, maintained as limited role as possible and wanted to get out at the first opportunity. It can thus be seen that the degree of involvement varied depending on the superpower. While neither superpower played a significant role in originating either conflicts, the US got more involved in them as compared to the Soviets. This was mainly due to the fact that the US had a greater interest in these conflicts than the Soviets, and thus were more strongly motivated to intervene. Thus, it can be said that US were fairly voluntary in their involvement in these regional conflicts, as they sought to further their own interests. US actions and policies during these conflicts also seemed to suggest voluntary involvement as they seldom showed signs of disengagement but rather tended towards escalation. The Soviets however, very much unmotivated to get involved, were cautious with regards to their involvement in the wars, playing as limited a role as possible. Thus one cannot say that the statement, is completely true, though it may be to a fairly large extent. ...read more.