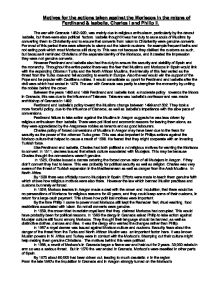 Motives for actions against Moriscos

Motives for the actions taken against the Moriscos in the reigns of Ferdinand & Isabella, Charles I and Philip II. The war with Granada 1482-920, was mainly due to religious enthusiasm, particularly by the devout Isabella, but there were also political factors. Isabella thought it was her duty to save souls of Muslims by converting them to Christianity and to ensure that converts from Islam to Christianity were genuine converts. For most of this period there were attempts to stamp out the Islamic customs for example frequent baths and not eating pork which most Moriscos still clung to. This was not because they disliked the customs as such, but because it reminded Christians of the separate identity of the Moriscos, and it created the impression they were not genuine converts. However Ferdinand and Isabella also had the duty to ensure the security and stability of Spain and the monarchy. Throughout the entire period there was the fear that Muslims and Moriscos in Spain would link with the expanding Ottoman Turks and the North African Muslims, the intensity of this fear varied as the threat from the Turks rose and fell according to events in Europe. ...read more.

Charles policy of forced conversions of Muslims in Aragon may have been due to the fears for security as the power of the ottoman Turks grew. This was also important in Philips actions against the Morisco culture that helped to cause a revolt of 1568. He feared that they might cooperate with an invading Turkish force. Like Ferdinand and Isabella, Charles had both political and religious motives for wanting the Moriscos to convert. In 1511, decrees issued that attack culture associated with Mudejars. This may be because Charles thought the conversions weren't genuine. In 1525, Charles issued a decree ordering the forced conversion of all Mudejars in Aragon. If they didn't convert they had to leave. This was probably for political security as well as religion. Charles was very aware of the threat of Turkish expansion in the Mediterranean as well as danger from the Arab Muslims in North Africa. By 1526 there was officially now no Mudejars in Spain. Efforts were made to teach them genuine faith which shows how religious motives were also there. ...read more.

It was known Muslim powers in N. Africa and Turkey were in contact with the Morisco's. Stamping out their culture might help making them genuine Christians. The motives behind this were political. In 1568, a revolt of Morisco's in Granada began a fierce war and held out for 2 years. 30,000 rebels in arm so was a serious threat. But in 1570 the war ended in Granada. Morisco's were resettled in other parts of Spain. By 1573 about 80,000 had been driven out, leading to much desolation in the region. From the late1560's the inquisition in Granada and in Aragon strongly turned on the Morisco's In 1573, Morisco's were banned from being priests. Philip also tried to make it so they couldn't take public positions of authority. By 1600 social and religious tensions were such that co-existence was impossible. Morisco population was growing quicker than Christian. Generally, Isabella was more motivated by religious reasons where as Ferdinand, Charles and Philip were all motivated by political. However, all the monarchs had a strong Catholic faith so religious motives were always going to be there. ...read more.