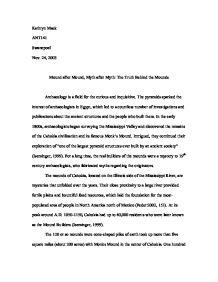 Mound after Mound, Myth after Myth: The Truth Behind the Mounds.

Kathryn Mack ANT141 Swanepoel Nov. 24, 2003 Mound after Mound, Myth after Myth: The Truth Behind the Mounds Archaeology is a field for the curious and inquisitive. The pyramids sparked the interest of archaeologists in Egypt, which led to a countless number of investigations and publications about the ancient structures and the people who built them. In the early 1800s, archaeologists began surveying the Mississippi Valley and discovered the remains of the Cahokia civilization and its famous Monk's Mound. Intrigued, they continued their exploration of "one of the largest pyramid structures ever built by an ancient society" (Iseminger, 1999). For a long time, the real builders of the mounds were a mystery to 19th century archaeologists, who fabricated myths regarding the originators. The mounds of Cahokia, located on the Illinois side of the Mississippi River, are mysteries that unfolded over the years. Their close proximity to a large river provided fertile plains and bountiful food resources, which laid the foundation for the most-populated area of people in North America north of Mexico (Feder:2002, 151). ...read more.

The rituals surrounding these burials mimic the ceremonies of the Natchez Indians of 17th and 18th century Mississippi, "where individuals often volunteered to be sacrificed upon a leader's death to raise their own or their family's status" (Iseminger, 1999). This was an example of proof that Native Americans built the mounds. Many of the artifacts found in the Cahokian mounds were the results of heavy trading. Sacred figurines and clay artifacts share the same illustrations as later Native American religious beliefs (Fagan, 2004:385). The Cahokians traded for items such as arrowheads originally from Midwest states. Excavators found other artifacts made from mica and copper hammered from Lake Superior. These artifacts prove that the socially complex society of Cahokian traders made it possible for them to have been the original mound-builders. Archaeology is the product of the curious nature of human beings who want to uncover the truth about ancient cultures. The mound-builders were once a mysterious race who turned out to be the native people of Mississippi. Through excavations and various other studies, archaeologists have revealed the truth behind the distorted myths of the early 19th century. ...read more.