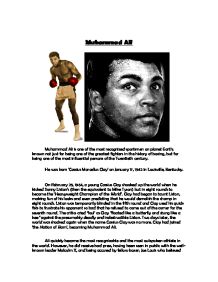 Muhammad Ali Muhammad Ali is one of the most recognized sportsmen on planet Earth; known not just for being one of the greatest fighters in the history of boxing, but for being one of the most influential persons of the Twentieth century. He was born 'Cassius Marcellus Clay' on January 17, 1942 in Louisville, Kentucky. On February 25, 1964, a young Cassius Clay shooked up the world when he kicked Sonny Liston's (then the equivalent to Mike Tyson) but in eight rounds to become the 'Heavyweight Champion of the World'. Clay had began to taunt Liston, making fun of his looks and even predicting that he would demolish the champ in eight rounds. Liston was temporarily blinded in the fifth round and Clay used his quick fists to frustrate his opponent so bad that he refused to come out of the corner for the seventh round. The critics cried 'foul' as Clay "floated like a butterfly and stung like a bee" against the presumably deadly and indestructible Liston. ...read more.

He still disagreed strongly about taking part in the Vietnam War, and many acquaintances and fellow athletes like Jim Brown, Bill Russell, and Kareem Abdul-Jabar admired Ali's strong stance. But Ali was convicted in the trial vs. the U.S. armed forces on June 19, and although his 5 year prison sentence and $10,000 fine was overturned, his boxing passport was terminated, and 'Heavyweight Champion' title was stripped off his belt. He was no longer the title-holder, but to the true boxing fans, Muhammad Ali was still the true 'World Champion'. Most of Ali's earnings came from giving lectures at various Colleges and Universities around the country. The speeches that he gave to the young audiences ranged from the lack of Black pride to the reason why he refused to enter the draft for the Vietnam War. Other money-making ventures included a movie documentary called 'A/K/A CASSIUS CLAY', and a starring role in Broadway's 'BUCK WHITE.' ...read more.

'The Rumble in The Jungle' took place in Africa. The American press did not hesitate to criticize the choice of location, but Ali was excited about being in a place operated entirely by Black people. Accompanied by music legends such as B.B. King, James Brown, The Spinners, and The Crusaders, the entire experience was inspiration for 'When we were Kings', a 1996 award-winning documentary. Ali strongly believed that since he was a strong believer in 'Allah', he would win his heavyweight championship back. And when the bell rang, that's what he did, with the people in the crowd screaming 'ALI BOMBAYA.' But 30 seconds into the 2nd round, Ali stopped dancing and began to lean on the ropes. Everybody in his corner screamed for him to move, but Ali stayed. He took the heavy punches of Foreman for six rounds straight. A right hand knocked Foreman down for the 1st time in his professional career as a boxer, and when the referee signaled, a mob of fans jumped into the ring to greet Ali as the new 'Heavyweight Champion of the World'. ...read more.