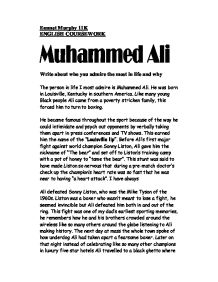 Emmet Murphy 11K ENGLISH COURSEWORK Write about who you admire the most in life and why The person in life I most admire is Muhammed Ali. He was born in Louisville, Kentucky in southern America. Like many young Black people Ali came from a poverty stricken family, this forced him to turn to boxing. He became famous throughout the sport because of the way he could intimidate and psych out opponents by verbally taking them apart in press conferences and TV shows. This earned him the name of the "Louisville lip". Before Ali's first major fight against world champion Sonny Liston, Ali gave him the nickname of "The bear" and set off to Liston's training camp with a pot of honey to "tame the bear". This stunt was said to have made Liston so nervous that during a pre-match doctor's check up the champion's heart rate was so fast that he was near to having "a heart attack". I have always Ali defeated Sonny Liston, who was the Mike Tyson of the 1960s. Liston was a boxer who wasn't meant to lose a fight, he seemed invincible but Ali defeated him both in and out of the ring. This fight was one of my dad's earliest sporting memories, he remembers how he and his brothers crowded around the wireless like so many others around the globe listening to Ali making history. ...read more.

Ali refused and stood defiant blasting the war. I admire this because he stood up for what he believed in and never backed down. "No Vietcong ever called me nigger" "You want me to fight for you, you won't even stand up for me right here". Muhammed Ali was arrested for refusing to carry out national service; he faced the maximum 5 years in jail and having his boxing licence revoked. Even at this stage Ali could have apologised for his remarks, while his attorneys negotiated a deal with the government. He chose another course: "Keep asking me, no matter how long On the war in Vietnam, I sing this song I ain't got no quarrel with the Vietcong" Even with a lengthy custodial sentence and a suspension from the board of boxing hanging over his head Ali stood up for what he saw right. He was under huge pressure at the time because it was when the civil rights movement was at its peak. He knew that if he was banned it would take away precious years away from him in his career when he was in his prime. Most of America's state boxing committees banned Ali from boxing and he was unjustly stripped off his heavyweight title. In his absence Joe Frazier took the vacant title and moved into Ali's empty top dog position. ...read more.

When Joe Frazier overpowered Ali in his next fight the paparazzi ran riot calling him a "has been" and a "spent force". He trained hard in order to prove his critics wrong. This never say die spirit earned him the legend status that he rightfully owns. Corrupt fight promoter Don King, signs current champion Foreman and Ali, lining up a fight in Zaire. The fight was to be called "The rumble in the jungle". Ali reclaimed his title by knocking out Foreman with a historical left hook in round 8. An attendance of 62,000 people and millions who watched on TV around the world witnessed the fight. Ali defeated Joe Frazier in his next title defence. He chose to fight on and defend his title. This would be a bad decision and would be one of the main reasons why he contracted Parkinson's disease later on. I have always admired Muhammed Ali for a number of reasons. He was and still is the best boxer that has ever lived becoming the first person to defend his title on three consecutive occasions. Ali always stood up for what he believed in. He protested over the way he and other blacks were treated in America by refusing to fight in Vietnam and by throwing his Olympic gold medal into the Hudson River. He was someone to look up to for oppressed black people around the world. In my opinion he was the Nelson Mandela of the sporting world. ...read more.