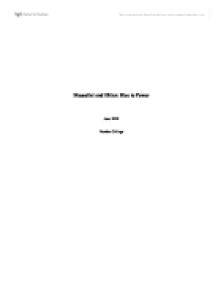 Mussolini and Hitler: Road to Power

Mussolini and Hitler: Rise to Power June 2010 Dundee College Benito Mussolini became prime minister of Italy in October 1922 at the age of 39, he is considered the creator of fascism. 11 years after Mussolini came to power, in 1933, Adolf Hitler became the leader of Germany at the age of 44. Both men became dictators, although Mussolini's road to full dictatorship took much longer, and they both formed totalitarian governments in their countries. They had many similarities in their beliefs and their roads to power. This essay will look at both Mussolini's and Hitler's rise to power. Their roads to dictatorship will be compared and contrasted, and their contributions to the start of WW2 will be discussed. When WW1 ended in 1918, all of the countries involved had suffered great losses. Over 600.000 Italian men had lost their lives. The cost of the war had put a huge strain on Italy's economy, and the Italian government had to resorted to borrowing money from the US and Britain just to cover the expenses, but it was not enough, and the government had to resort to printing more money instead; causing inflation. Prices started going up, which meant people could hardly afford to feed themselves. There were no jobs for the soldiers that came back from the war, and unemployment rates soared across the country. Italy had been promised a lot of land when she signed the treaty of London, joining the entente in the war, but the treaty of Versailles; which was signed in 1919, did not live up to Italy's expectations, and many felt that the war had been fought for nothing. ...read more.

Hitler's party had been relatively small at the time, and he had overestimated the amount of support he would gather; relying on the assumption that because of the economic conditions people would follow him. Mussolini's fascists on the other hand had spread across Italy, and although small enough to be dismantled by the police and military, Mussolini had been better at judging the right timing, as he assumed the King would not want to go against him in fear of a civil war; which proved to be correct. Hitler spent his time in prison writing Mein Kampf. The Book became very popular and was read by millions; who now became familiar with the name Hitler and his ideas. Mussolini had already had an audience for his ideas for many years, first through his position as editor of the socialist paper Avanti and later his own paper Il popolo d'italia. After being released from prison, after serving just 9 months, Hitler revived his Nazi party. Hitler had realised that he could not gain power through revolution and started focusing on using legal constitutional means to gain power. Both Hitler and Mussolini were men of great charisma, and excelled at public speaking. They told the people what they wanted to hear, and when they spoke people would listen. In fact Hitler's voice has often been described as hypnotising. They knew how to work the crowds; by using gestures, tone of voice, building up momentum and getting the crowds involved; such as shouting back Sieg Heil. ...read more.

Hitler was concuring Europe and Mussolini wanted a piece of it. Both these men managed to establish totalitarian regimes. The effects of WW1 had left both countries in a bad state, with unemployment high and in effective governments, people were looking towards alternatives. Both Mussolini and Hitler were unhappy about their countries had come out of the war, Mussolini's fascism, and Nazism inspired by it, told the people what they wanted to hear. They used force in the form of the black-shirts and brown-shirts to thwart anybody who was against them, and succeeded to gain power. While Mussolini became Prime Minister under the threat of a March on Rome, Hitler chose to go the legal way to becoming Chancellor after his failed Munich Putsch. They used similar tactics to gain the upper hand in parliament. It took Hitler much less time to establish a dictatorship, but Mussolini had already provided the blue-print for Hitler to follow. Mussolini did not become the absolute ruler that Hitler did as the King still had the power to dismiss him, whereas Hitler's rule was absolute. When Germany's power grew, Mussolini allied himself with Hitler believing that Hitler would succeed, and ended up joining WW2 on Hitler's side. Both men wanted more power and to make their countries greater. Hitler was succeeding in his campaigns and Mussolini realised that he would either join Germany and get a piece of the pie, or eventually have to succumb to Hitler. It was clear though that Mussolini and Hitler were not equal partner, but rather that Mussolini was simply trailing behind grabbing scraps on the way. ...read more.