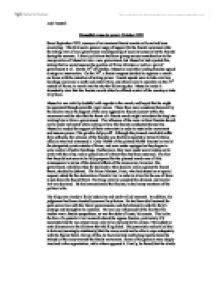 Mussolini comes to power, October 1922 Since September 1922, rumours of an imminent fascist march on Rome had been circulating. This followed a general surge of support for the fascist movement after the taking over of local government and dispersing of socialist councils by the fascists during the summer. Liberal politicians had been giving serious consideration to the incorporation of Mussolini into a new government, but Mussolini had rejected this, stating that he would assume the position of Prime Minister or not be a part of government at all. On the 16th of October, Mussolini and other leading fascists agreed to stage an insurrection. On the 24th, a fascist congress decided to organise a march on Rome with the intention of seizing power. Fascist squads were to take over key buildings and areas in north and central Italy, and others were to assemble on the 27th outside of Rome, to march into the city the following day. Mussolini made it abundantly clear that the fascists would either be offered control of the country or take it by force. Mussolini was initially doubtful with regards to the march, and hoped that he might be appointed through peaceful, legal means. ...read more.

He was also influenced by the fact that his mother was a fascist sympathiser, as was the duke of Aosta, his cousin. This led to the fear of a potential rival monarch should he oppose fascism, particularly if it succeeded and he was swept away, only to be replaced by his cousin. This added an extra dimension to the dilemma that the King faced. His pessimistic outlook led him to believe (seemingly mistakenly) that the army would not be able to cope adequately with the fascist threat. On top of this, he had received conflicting reports about the attitude of the army towards the fascist movement. Some of his generals were deeply involved in the organisation, while others opposed it. Finally, he feared that the divide in terms of attitude towards the fascists might lead to a rift within the country, perhaps even civil war. This was arguably the main factor that influenced his ultimate stance with regards to the fascists and Mussolini, in that he could not be responsible for such conflict. All of these factors contributed to the ultimate decisions made by King Victor Emmanuel. ...read more.

The socialists did not order a strike in protest at Mussolini's new position, and some even accepted it as it represented the demise of liberal government. Members of the elite, such as major industrialists and agriculturalists, advocated a Mussolini-led government and this, in particular the financial support it entailed, was important to the fascists. Despite the early anti-church stance of the Fascist movement, Mussolini had become friendly with the pope, Pius XI, who had previously allowed the display of fascist banners in church and stressed the need for a peaceful settlement of the political situation on October. The support of the head of the catholic church was inevitably an extremely important tool in terms of gaining support for Mussolini, due to the huge number of catholics within the country. In other areas able to influence the populace, the liberal press supported fascist violence in that it was a solution to anarchy. The intellectual classes lent their support to fascism as a way of 'cleansing' Italy and restoring its former glory. Support came, in some shape or form, from many important areas within the country, although the fascists were definitely not swept to power through popular support. Mussolini's individual charisma played a large part in fascist popularity rather than deep conviction in the ideologies of fascism as a movement. ?? ?? ?? ?? Jack Tunstall ...read more.