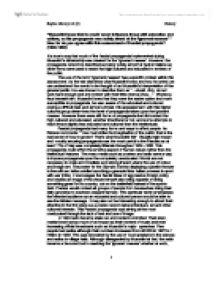 &quot;Mussolini knew that he could never influence those with education and culture, so his propaganda was solely aimed at the 'ignorant masses' &quot;How far do you agree with this assessment of Fascist propaganda? (1924-1936)

"Mussolini knew that he could never influence those with education and culture, so his propaganda was solely aimed at the 'ignorant masses' " How far do you agree with this assessment of Fascist propaganda? (1924-1936) It is true to say that much of the fascist propaganda implemented during Mussolini's dictatorship was created for the 'ignorant masses'. However, the propaganda cannot be described as being 'solely aimed' at typical Italians as other forms were used to reach the high cultured and educated members of the public. The use of the term "ignorant masses" has a specific context within this assessment. As the text describes what Mussolini knew and how he acted, we can understand the words to be thought of as Mussolini's interpretation of the general public. He was known to describe them as "...stupid, dirty, do not work hard enough and are content with their little cinema show..." (Robson), thus beneath him. Mussolini knew that they were the easier option and more susceptible to propaganda, he was aware of the educated and cultured posing a difficult task and almost a threat. His appeasement with this higher cultured group determines the level of propaganda taken upon the ignorant masses. However there were still forms of propaganda that did contact the high cultured and educated, whether intentional or not, and some attempts to reach those slightly less educated and cultured than the intellectuals. ...read more.

as it reached out to many. It subtly imposed these ideas by striking patriotic feeling, implying the idea of restoring Italy to a powerful exciting nation. Sport, another mass activity, promoted national pride and the physical and emotional struggle for war. Again it brought about a sense of collective identity, social solidarity and discipline via excellent access, opportunity and provision. Many new stadiums were built and successful national teams were seen as a way to increase national pride and therefore support for the regime. E.g. Carnera became the heavyweight boxing champion from 1933-1935. Anyone could take part at low cost, however sport may have reached out to the higher educated and cultured as some may have had interests in sport before Fascists 'propaganderised' it. In terms of culture, the Fascists simplified high cultural aspects such as art to incorporate it into every day life for the 'masses'. Its' use was to hark back to ancient Rome, which in itself was a powerful symbol of greatness and success. Art had greater provision such as through architecture so that it had a strong impact throughout day to day life. However impressive it may have been in the large towns and cities, the peasant southern towns saw little of this, only on posters which had a lesser impact. The expense was therefore questionable considering the overall impact. Other failure stems from cultural diversity in Italy. ...read more.

Through their failure during WW1, many Italians (irrelevant of education) will have felt shame and have hope of a rebirth of a greater Italy. Propaganda such as parades and national sporting events may have had an impact outside the ignorant masses, questioning the idea of never being able to reach the educated and cultured. It is questionable whether they realised they were possibly reaching this higher group, but as the assessment states that "Mussolini KNEW that he could NEVER influence..." the probability is that they really knew they couldn't reach anyone cultured and educated at all by any means and that any success was by chance. In conclusion, I agree with this assessment of fascist propaganda to the extent that the majority of the propaganda was aimed at the general public or "ignorant masses". However there were sub-classes which the propaganda did reach and exceptions to the statement of "never" influencing those with education, and "solely" aiming it at the masses. Educated and cultured members of the public may have had interests in modern day architecture, ancient Rome or sport that drew them to appreciate the Fascists regime and give it more support. It seems likely that propaganda played a major role in sustaining Mussolini's regime and making him an extremely popular leader. This in itself supports the idea that he had a majority of support of the masses, which was influenced by successful and subtle propaganda. ?? ?? ?? ?? Sophie Morley U6 (2) History 1 ...read more.