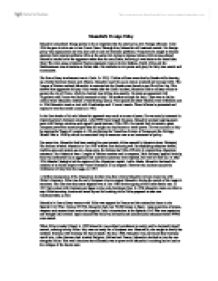 Mussolini's Foreign Policy Mussolini considered foreign policy to be so important that he acted as his own Foreign Minister. After 1936 he gave it to his son in law Count Ciano. Through him, Mussolini still retained control. His foreign policy was expansionist and was also used to sort out domestic problems. Frequently he sought to distract attention from internal problems while at the same time trying to impress Italians with success abroad. Mussolini tended to be the aggressor rather than the conciliator, believing it was better to be feared than liked. The main areas of planned Fascist expansion were to be the Balkans, North Africa and the Mediterranean was to become an Italian lake. His methods to win power and glory for Italy were erratic and inconsistent. His first military involvement was in Corfu. In 1923, 5 Italian officers were shot by Greeks while drawing up a border between Greece and Albania. ...read more.

Mussolini enjoyed signing peace pacts with foreign countries and signed 8 pacts between 1926-1930. He wanted Italy to remain a great European power but secretly hoped that she might one day become a world power. He won acclaim in Italy by signing the Treaty of Locarno in 192 confirming the Versailles division of Europe and the Kellogg-Briand Pact in 1928 by which he committed Italy to renounce war as an instrument of policy. For some time, Mussolini had been casting his eyes towards Africa especially Abyssinia (now Ethiopia). The Italians invaded Abyssinia in Oct 1935 without first declaring war. By employing aeroplane bombs, machine guns and poison gas on a large scale, the Italians had little difficulty in overcoming Abyssinian resistance. But Abyssinia was a League of Nations member and its emperor, Haile Selaisse, applied for help. Italy was condemned as an aggressor and economic sanctions were imposed, but were of little use. ...read more.

Italy's intervention in the Spanish Civil War was expensive and brought little reward. Spain ensured that Italy was militarily and economically exhausted before WWII even started. When Hitler invaded Poland in 1939 Mussolini was suddenly awakened to reality and he declared himself neutral, refusing to help Hitler. Italy was not ready for a European war. Meanwhile, she sought to fortify her northern frontiers with Germany for fear of attack. By June 1940, Mussolini was convinced that Germany would win. After Germany had invaded Belgium, Holland and France, Mussolini decided to join the war alongside Hitler. This was a decision that ultimately was to prove to be Mussolini's undoing and to lead to the collapse of the fascist state. Mussolini was shot and hanged upside down with his mistress on April 18 1945. The very man who had introduced to the world the concepts of fascism and totalitarianism faced an ignominious and inglorious end. With his death Italian fascism became a corpse and the myth of the invincible leader was shattered. ...read more.