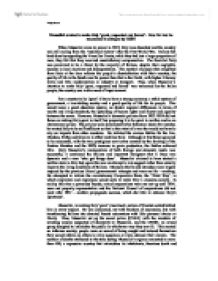 Mussolini wanted to make Italy 'great, respected and feared'. How far had he succeeded in doing so by 1939?

Mussolini wanted to make Italy 'great, respected and feared'. How far had he succeeded in doing so by 1939? When Mussolini came to power in 1922, Italy was disunited and the country was still reeling from the 'mutilated victory' after the First World War. Italians felt hard done by regarding the Versailles Treaty; while they had lost a large proportion of men, they felt that they received unsatisfactory compensation. The Socialist Party was perceived to be a threat by the majority of Italians, despite their negligible success in local elections and disorganisation. The number of people that emigrated from Italy at the time reflects the people's dissatisfaction with their country; the quality of life in the South was far poorer than that in the North, with higher illiteracy levels and little modernisation in industry or transport. Thus, when Mussolini's intention to make Italy 'great, respected and feared' was welcomed by the Italian people; the country was in dire need of improvement. For a country to be 'great' it has to have a strong economy, a stable system of government, a law-abiding society and a good quality of life for its people. This would mean a good education system, no drastic regional differences in terms of wealth and living standards, the upholding of human rights and liberty and equality between the sexes. ...read more.

At first, at least, the international impression of Mussolini was favourable. His warning to Hitler to stay out of Austria; the Locarno Pact of 1925 and the 'Four Power Pact' of 1933 apparently showed Mussolini to be a peace-loving leader, wanting to kerb the threat of Nazi Germany alongside the Western powers. His domestic policies, like the previously impossible draining of the Pontine Marshes, were impressive to the outside world, causing Winston Churchill to describe him in 1933 as "the Roman genius...the greatest lawgiver among living men." In 1938 Mussolini was attributed with having prevented a war in Europe at the conference in Munich to give the Czech Sudetenland to Germany; he appeared to be every inch the just and skilful politician. However, Mussolini's urge to create an Empire could never really be compatible with Western democracies' desire to maintain the status quo. Il Duce was jealous of their colonies, which surrounded him in the Mediterranean, and continuously harked back to the glorious days of the Roman Empire in his 'Romanita' propaganda; he put on a conciliatory front in a shallow attempt to unite with the Western powers. He showed his true colours with the Corfu incident, when he invaded Corfu after the murder of an Italian official who had been working on resolving the border dispute between Greece and Albania, effectively demanding a ransom of 50 million lire and an apology. ...read more.

Italy gained little with the acquisition of Abyssinia; it was an expensive exploit for the country and for Mussolini's international relations. The fact that Italy was weak in 1939 and that the world saw that she was not ready for war, would have contributed to the internationally low opinion of Mussolini's regime. Mussolini's very attempts at intimidating the Western world had destroyed any propensity Italy had of doing so by 1939. Despite his many claims to the contrary, in the eyes of the majority of historians Mussolini had not succeeded at all in making Italy 'great, respected and feared' by 1939. His policies, both domestic and foreign, were opportunistic; his belief that "You can usually get away with 97 cents worth of mere public clamour and three cents of solid achievement" had a bearing on everything he did. While propaganda proclaimed him a genius, he did little to genuinely change or improve Italian society and the international opinion of Italy fluctuated from indifference to hatred during his dictatorship; Mussolini was ridiculed in Britain, not respected or feared. However, as Mussolini was able to convince himself and many Italians that he was successful, perhaps this evaluation is a moot point. Some Italians today, like the historian de Felice, are not completely derogatory of Mussolini; context and point of view mean that there are slightly differing assessments of Mussolini's successes and failures. Vicky Rutter ...read more.