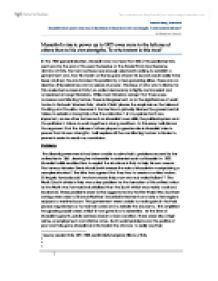 Mussolini(TM)s rise to power up to 1922 owes more to the failures of others than to his own strengths. To what extent is this true?

Mussolini's rise to power up to 1922 owes more to the failures of others than to his own strengths. To what extent is this true? In the 1922 general election, Mussolini won no more than 2% of the parliamentary seats yet, by the end of the year the leader of the Fascist Party had become dictator of Italy. He had nowhere near enough electoral backing to establish a government and, had his march on Rome gone ahead his squads could easily have been crushed. He was handed the position by a few governing �lites; there was no election, little resistance and no seizure of power. The issue of who was to blame for this unelected success in Italy's so-called democracy is highly controversial and undecided amongst historians. While most historians accept that there were numerous contributing factors, there is disagreement as to the significance of each factor. In his book 'Modern Italy', Martin Clark1 places the emphasis on the failure of the King and the elite. However E. Tannenbaum primarily blames the governmental failure to rebuild a strong Italy after the unification2. In my opinion both are important, as are other factors such as Mussolini's own skills, the political system and the politician's failure to work together in strong coalitions. In this essay I will discuss the argument that the failures of others played a greater role in Mussolini's rise to power than his own strengths. I will explore all the contributing factors to his rise to power in order to reach my conclusion. Problems The Liberal governments had been unable to solve Italy's problems caused by her unification in 1861; leaving her vulnerable to extremists such as Mussolini in 1922. Mussolini's skills enabled him to exploit the situations in Italy to help his own means. The famous historian Denis Mack Smith stresses the role of Mussolini in manipulating a complex situation3. The �lite had agreed that they had to create a unified nation; D'Angelo famously said "we have made Italy; now we must make Italians"4. ...read more.

He underestimated Mussolini and was convinced that Mussolini could be tamed and his squads used to his own advantage. The pact gave the Fascists the springboard they needed to establish themselves as a serious political player and gave them 35 seats in the Chamber of Deputies. Mussolini carefully selected these candidates ensuring their respectability and moderation which was important as the Squadristi violence was starting to lose Mussolini governmental support. This shows that although Mussolini was aware that Squadristi violence was beneficial in some ways, this alone would not get him into government. The unintelligent, foolish decision made by Giolitti shows great weakness on his part. It also shows how easily Mussolini was able to exploit politicians; proving him to be good negotiator and showing his ability make the most of the weaknesses of others. Mussolini was also underestimated by D'Annunzio who saw Mussolini as his chief propagandist and fund raiser rather than as a rival or a threat; Mussolini used this to his advantage. He supported the Government's decision to crush D'Annunzio's coup of the Fiume; as a result D'Annunzio lost his power base and it removed all of Mussolini's rivals for power on the Right. Many of the Liberal politicians believed that they could use Mussolini to strengthen their position to defeat rivals. Mussolini cleverly played on this, negotiating with each politician about coalitions and political deals with the Fascists. None of the influential politicians were se men were willing to work together to prevent Mussolini nor did they have the power individually. Facta could have convinced Giolitti to end his differences with D'Annunzio and take steps towards forming a stronger coalition. Together Giolitti and D'Annunzio would have been considerably stronger than Facta's government and would have had the ability to put pressure on the King to use the Army to crush Mussolini's violence and end his "March on Rome. In order to combat the threat of this happening, Mussolini opened up his own negotiations with D'Annunzio in 1922. ...read more.