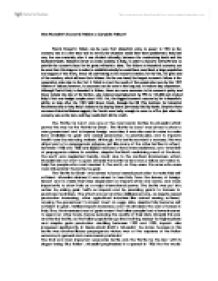 Was Mussolini's Economic Policies a Complete Failure? Fascist Economic failure can be seen from Mussolini's entry to power in 1922 as the economy was in a dire state and to rectify the situation would have been problematic. Italy had very few raw materials; also it was divided culturally, between the modernising North and the backward South. Mussolini aimed to create autarky in Italy, in order to become self-sufficient to provide the economic base for his great militaristic ideas. The failures in Mussolini's economy can be seen from this stage as in order to establish autarky he would have need land, a large population and support of the elites, hence all culminating in his economic battles; for the lira, for grain and of the marshes, which all have their failures. On the one hand, the largest economic failure is the corporative state due to the fact it failed to meet the needs of the people also seen by the 1927 Charter of Labour; however, its successes can be seen in the long run, in modern day corporatism. ...read more.

The 'Battle for Grain' was aimed to boost cereal production to make Italy self sufficient. Mussolini claimed it was aimed to free Italy 'from the slavery of foreign bread' and to make them less dependent on imports when war came, and more importantly to show Italy as a major international power. The battle was put into action by raising grain tariffs on imports and by providing grants to farmers to purchase machinery. The effect was yet another disillusioned one, as despite cereal production increasing, other agricultural industries like animal rearing suffered, causing the government to import meat an eggs. Also, despite Italy become self sufficient in grain, fertiliser imports increased, and this all raised the cost of bread in Italy. Thus, the increased cost of grain meant the Italian people had a lower income to spend on other foods, hence reducing the quality of their diets. Overall, this was another lost battle, as the Italian population gained nothing except for higher prices and despite grain production doubling between 1922 and 1939, imports also increased significantly. ...read more.

In addition they all created far worse problems that they originally sought to solve, such as the high taxation and inflation from the 'Battle of the Lira'. Finally these battles can in some ways be seen as a success by boosting public morale and belief in the fascist regime and the fact that some aspects of every battle did help the economy. Yet this is over-shadowed by the strain on the Italian people to meet these targets. The failure of these economic battles cannot surmount to the failures that occurred in the process of the creation of an Italian corporate state "Fascism should more appropriately be called Corporatism because it is a merger of state and corporate power". Mussolini believed strongly in the idea of the corporative state calling this idea the 'third way', a system in which federations and syndicates were represented equally. Yet despite this the majority of historians see Corporatism as an elaborate fraud and one of its sole uses was for propaganda purposes. Corporatism was one of Fascisms largest economic policies and in some ways can be seen as a failure. ...read more.