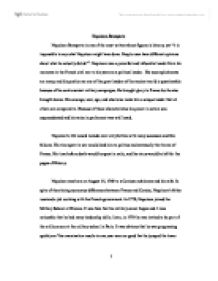 Napoleon Bonaparte Napoleon Bonaparte is one of the most written-about figures in history, yet "it is impossible to say what Napoleon might have done. People even have different opinions about what he actually did do"1. Napoleon was a powerful and influential leader from his moments in the French civil war to his years as a political leader. His accomplishments are many, and his position as one of the great leaders of the ancient world is questionable because of his controversial military campaigns. He brought glory to France but he also brought shame. His courage, zeal, ego, and charisma make him a unique leader that all others are compared to. Because of those characteristics his power in action was unprecedented and his voice in parliament was well heard. Napoleon's life would include over sixty battles with many successes and few failures. His time spent in war would lead him to politics and eventually the throne of France. His time before death would be spent in exile, and his story would be left for the pages of History. Napoleon was born on August 15, 1769 to a Corsican nobleman and his wife. In spite of there being numerous differences between France and Corsica, Napoleon's father received a job working with the French government. In 1778, Napoleon joined the Military School at Brienne. It was then that his military career began and it was noticeable that he had many leadership skills. Later, in 1778 he was invited to be part of the artillery core at the military school in Paris. It was obvious that he was progressing quickly as "his examination results in one year were so good that he jumped the lower grades and was immediately made Lieutenant."2 At the young age of 15 he joined his first regiment. Although he was proud to fight for France, "when the French Revolution broke out in 1789 Napoleon welcomed it mainly because he thought it would bring freedom for his native island of Corsica."3 Napoleon found it ...read more.

In addition to these problems, Napoleon divorced Josephine in 1809 and later married an Austrian noble named Marie Louis. Upon his return from Spain, Napoleon found out that Tsar Alexander of Russia was not complying with their treaty. Alexander did not wish to continue the blockade against England because much of their trade took place with them. This angered Napoleon and so he planned a Russian invasion that included half a million French troops. As they marched toward Moscow, Russian soldiers strategically retreated over and over again. Their plan had worked, as the French army had been lessened by two thirds because of hunger and fatigue. Napoleon's army finally arrived in Moscow only to find a deserted city that was engulfed with flames. Temperatures dropped and the French had no shelter so they decided to return home. When they arrived in France only ten thousand men had survived from the original grand army of five hundred thousand. The Russian campaign left Napoleon's military weak and his country demoralized. Napoleon's empire seemed to have been falling apart as the Austrians defeated them once more and the allies took control of Paris as he went into exile for several months. During this time Louis XVIII was named king. The people of France were not satisfied with the new monarch so Napoleon returned from his Island to reinstate himself. He believed that he would need to continue his military campaign to ensure his leadership. The Battle of Waterloo began on June 18th. During this battle, Napoleon's presence was week, as he had been feeling ill. He ordered several attacks against the British but the Duke of Wellington stayed in a defensive mode until Napoleon was left with no army. After the British and Prussians defeated him at Waterloo in 1815 he realized it was over; "He returned to Paris but the French would not take him back as ruler. ...read more.