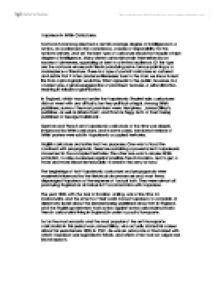 Napoleon in British Caricatures Cartoons have long assumed a certain average degree of intelligence in a nation, an awakened civic conscience, a sense of responsibility for the nation's welfare. And yet the best type of caricature should not require a high degree of intelligence. Many clever cartoonists strain themselves by an excess of cleverness, appealing at best to a limited audience. Of this type are the cartoons whose point lies in parodying some famous painting or a masterpiece of literature. There is a type of portrait caricature so cultured and subtle that it often produces likenesses truer to the man we know in real life than a photograph would be. ...read more.

German and French anti-Napoleonic caricature of the time was deeply influenced by British caricature, and in some cases, translated versions of British posters were sold in Napoleonic occupied territories. English caricature and satire had two purposes. One was to flood the continent with propaganda, therefore sustaining a powerful Anti-Napoleonic movement in the occupied territories. The other one was to arouse British patriotism, to raise awareness against possible French invasion, and to get a more and more discontented public to enrol in the army or navy. The beginnings of Anti-Napoleonic caricature and propaganda were massively influenced by the historical circumstances and, most times, disparaged Napoleon at the expense of factual truth. ...read more.

in order to pacify Bonaparte. By far the most sarcastic and the most popular of the anti-Bonaparte caricaturists in this period was James Gillray, who actually started his career almost 34 years before 1803, in 1769. He was an advocate of the hatred with which Napoleon was regarded in Britain, and which often took on vulgar and brutal aspects. English caricature, like most caricature, was not interested with the truth. As but an example are the multiple connections of Bonaparte with the guillotine in Gillray's works, overlooking the fact that between Napoleon and the guillotine no possible sympathy existed. As the invasion scare melted away, at the end of 1803 and the beginning of 1804, the production of caricatures and patriotic prints slowed down. Very few patriotic bills and caricatures were printed in 1804. ...read more.