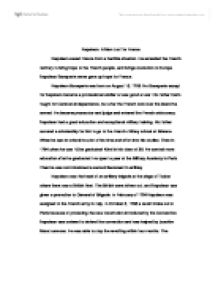 Napoleon saved France from a horrible situation. He extended the French territory to bring hope to the French people, and brings revolution to Europe. Napoleon Bonaparte never gave up hope for France.

Napoleon: A Man Lust for France Napoleon saved France from a horrible situation. He extended the French territory to bring hope to the French people, and brings revolution to Europe. Napoleon Bonaparte never gave up hope for France. Napoleon Bonaparte was born on August 15, 1769. No Bonaparte except for Napoleon became a professional soldier or was good at war. His father Carlo fought for Corsican independence, but after the French took over the island he served. He became prosecutor and judge and entered the French aristocracy. Napoleon had a good education and exceptional military training. His father secured a scholarship for him to go to the French military school at Brienne. When he was in school he a lot of his time and effort into his studies. Then in 1794,when he was 15,he graduated 42nd in his class of 58. He wanted more education after he graduated. He spent a year at the Military Academy in Paris. Then he was commissioned a second lieutenant in artillery. Napoleon was the head of an artillery brigade at the siege of Toulon where there was a British fleet. ...read more.

It did not do much to solve the financial problems and military problems in France. Attacks on the republic and other conservatives increased. Rising prices and disrupted production drove some groups in France to armed protests. And foreign hostility to France continued. Then when Napoleon, Sieves, and their followers got their chance they executed the coup d'etat. Armed soldiers forced legislators from their chambers, and abolished the directory. France proclaimed a new form of government that Napoleon called the Consulate. Three consuls headed it, and Napoleon was the first consul. Napoleon Bonaparte made many reforms that helped France. One major reform was the Napoleonic Code, Which was a series of laws that some people thought was his greatest achievement ever. This code granted equality to all the citizens of France before the law. It confirmed the end of serfdom and slavery in France. It also gave people the freedom of occupation and the freedom to practice their religion. But, it reduced the rights of some groups including women. There were many other forms as well that strengthened the state. He initiated the Concordat with Pope Pius VII, Which re-established Roman Catholicism. ...read more.

Here are some of those changes. All the territory conquered by Napoleon was taken away from France. Russia received the major part of the former Duchy of Warsaw. Prussia received West Prussia, Posen, The northern half of Saxony, and the greater part of the provinces of the Rhine and West Phalia. And Austria got back most of the territory that it had lost. The congress took an important step in stopping the slave trade. It provided the freedom to navigate rivers that formed boundaries between states. Also the congress reestablished the balance of power among the countries of Europe. Napoleon never really abused his power he remained a fair leader to the people of France all of his life. Napoleon has been referred to as the "first modern dictator," because he didn't abuse his power compared to other leaders in western civilization. Napoleon cared more about the well being of the French people, and didn't care about getting money from the government. Napoleon's achievements and goals should be evaluated in a good way. Because he wasn't a tyrant, he achieved those most of his goals in a civilized way. Napoleon was one of the more fair, and better leaders than the ones that came earlier in history..... But his wife was a whore! (Had to throw that in jokingly) ...read more.