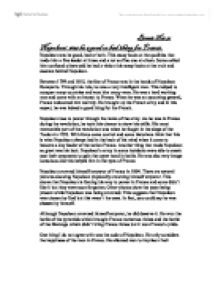 Napoleon: was he a good or bad thing for France

Bennie Nze 9c Napoleon: was he a good or bad thing for France. Napoleon was he good, bad or both. This essay looks at the qualities that made him a fine leader at times and a not so fine one at others. Some called him confused others said he had a vision this essay looks at the truth and essence behind Napoleon. Between 1799 and 1815, the fate of France was in the hands of Napoleon Bonaparte. Through his rule, he was a very intelligent man. This helped to conquer many countries and won him many wars. He was a hard working man and came with an impact to France. When he was an upcoming general, France welcomed him warmly. ...read more.

Napoleon crowned himself emperor of France in 1804. There are several pictures showing Napoleon physically crowning himself emperor. This shows that Napoleon is forcing his way to power in France and some didn't like it but they were soon forgotten. Other photos show the pope being present while Napoleon was being crowned. This suggests that Napoleon was chosen by God but this wasn't the case. In fact, you could say he was chosen by himself. Although Napoleon crowned himself emperor, he did deserve it. He won the battle of the pyramids which brought France numerous riches and the battle of the Marengo which didn't bring France riches but it won France's pride. One thing I do not agree with was the code of Napoleon. ...read more.

The battle that lost Napoleon his empire was the battle of Russia. When Napoleon took his army to battle, Russia he lost a lot of force and gave Britain and Germany an opportunity to strike back at Bonaparte and defeat his army. Napoleon was then captured and this was not at all good for France. In my opinion, Napoleon Bonaparte was a good thing for France. This is because he did more good things for France than bad. He built land marks and tourist attractions for France. He improved their learn systems and made Frances military powerful. Although he did lose a lot of lives in the battle of Russia, which was a terrible thing for France as they were on the defensive, his rein benefited the French economy and gained respect for France all around the world. Napoleon Marengo ...read more.