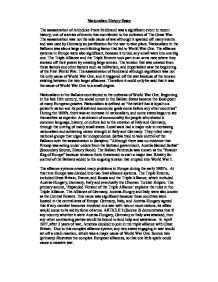 Nationalism, the assassination of the Archduke, the arms race and the alliance systems in Europe were all significant factors causing the Great War.

Nationalism History Essay The assassination of Archduke Franz Ferdinand was a significant event in recent history, one of a series of events that contributed to the outbreak of The Great War. The assassination was not the sole cause of war although it sparked off many events and was used by Germany as justification for the war to take place. Nationalism in the Balkans was also a large contributing factor that led to World War One. The alliance systems in Europe were also significant, because it turned any small wars into one big one. The Triple Alliance and the Triple Entente took part in an arms race where they showed off their power by creating large armies. The tension that was created from these factors and other factors such as militarism, and imperialism saw the beginning of the First World War. The assassination of Ferdinand although significant was not the only cause of World War One, and it triggered off the war because of the tension existing between the two larger alliances. ...read more.

The primary source, 'Expanded Version of the Triple Alliance' explains the rules in the Triple Alliance. The Alliance of Germany, Austria-Hungry and Italy were also known as the Central Powers. This name was significant because these countries were located in the central area of Europe. Germany, Italy, and Austria-Hungary agreed that if any member becomes involved in a war with two or more nations, its allies would come to its aid by force of arms. ARTICLE 2 (Source 3) demonstrates that if any country whether it were Austria-Hungary, Germany or Italy was attacked, then any other contracting parties would be bound to lend help and assistance. In April 1917, after 3 years of war, America decided to join in the triple alliance with Great Britain. Due to this complex alliance system, any two states engaging in war would set off a chain reaction, which was a major cause of World War One. Source two (primary) illustrates the complex European alliances, so that one little spark could cause a massive war. ...read more.