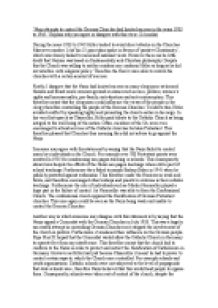 'Nazi attempts to control the German Churches had limited success in the years 1933 to 1945. Explain why you agree or disagree with this view. (24 marks)

﻿?Nazi attempts to control the German Churches had limited success in the years 1933 to 1945.? Explain why you agree or disagree with this view. (24 marks) During the years 1933 to 1945 Hitler tended to avoid direct attacks on the Churches. Moreover number 24 of his 25-point plan spoke in favour of 'positive Christianity?, which was closely linked to racial and national views. However there can be little doubt that Nazism was based on fundamentally anti-Christian philosophy. Despite this the Church was willing to neither condone nor condemn Hitler so long as he did not interfere with religious policy. Therefore the Nazi?s were able to control the churches with a certain amount of success. Firstly, I disagree that the Nazis had limited success as many clergymen welcomed Nazism and found much common ground on issues such as race, politics, women?s rights and homosexuality, pro-family, anti-abortion and anti-contraception. This therefore meant that the clergymen could influence the views of the people in the clergy therefore controlling the people of the German Churches. ...read more.

As Niemoeller was able to form the Confessional Church. The confessional church opposed the Nazification of German Protestant churches. This once again could be seen as the Nazis being weak and unable to control the German Churches. Another way in which someone may disagree with this statement is by saying that the Nazis signed a Concordat with the German Churches in July 1933. This was a hugely successful attempt in controlling German Churches as it stopped the involvement of the church in politics. Furthermore it weakened their influence on the German people. Pope Pius XI hoped that the Concordat would allow the Catholic Church in Germany to operate free from any interference. This therefore meant that the church had to conform to the Nazis in order to protect and restrict the Nazification of Catholicism in Germany. However as Hitler had just became Chancellor it meant he had to power to control certain aspects, which the Church once controlled. For example schools and youth organisations. Catholic schools were not subjected to the level of propaganda that state schools were, therefore Nazis believed that this would lead people to oppose them. ...read more.

Finally, someone may disagree as the Churches welcomed the Nazi stance on Communism and the Weimar Republic. This consequently meant that the Churches created few obstacles to Nazi policies for the most part were seen as compliant. This can be supported by the fact that the German Churches throughout the years 1933-1945 did not openly riot or go against the Nazi?s on a mass scale and instead attempted to support them in many ways. To conclude it is difficult to calculate the general level of success for numerous reasons. First and foremost from 1935 onwards Nazi tactics developed into a kind of war of attrition with the Churches. This may indicate the difficulty faced by the Nazi regime in knowing how to deal with the German Churches. Catholics had become alarmed, soon after signing the Concordat, when Catholic minister, Erich Klausener was murdered in 1934, with the banning of crucifixes in schools in 1935 and the increasing pagan ideology of Nazi radicals. Likewise the banning of Catholic youth groups in 1936 and the publication of ?With Burning Concern? in 1937 showed elements of tension. However the Nazi?s successfully managed to control politics without the influence of the churches therefore showing how they controlled the German churches successfully. ...read more.