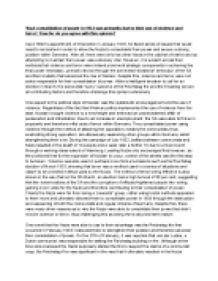 Nazi consolidation of power in 1933 was primarily due to their use of violence and terror. How far do you agree with this opinion?

﻿?Nazi consolidation of power in 1933 was primarily due to their use of violence and terror.? How far do you agree with this opinion? Upon Hitler?s appointment of Chancellor in January 1933, he faced series of issues that would need to be tackled in order to allow the Nazis to consolidate their power and secure a strong position within Germany. After all, there were only two other Nazis in the cabinet of twelve and so attempting to maintain their power was extremely vital. However, it is evident across their methods that violence and terror were indeed prominent strategic components in achieving the final power necessary, primarily shown through the somewhat ?dictatorial? behaviour of the SA and their brutality that advanced the rise of Nazism. Despite this, violence and terror were not solely responsible for their consolidation of power, Hitler?s intelligent decision to call for an election in March, the somewhat ?lucky? outcome of the Reichstag fire and the Enabling Act are all contributing factors and therefore challenge this opinion extensively. One aspect to the political style of Nazism was the systematic encouragement and the use of violence. Regardless of the fact that Weimar politics implemented the use of violence from the start, Nazism brought violence to a new height and enforced an unprecedented affair of persecution and intimidation. ...read more.

As well as violence, terror and the fire at the Reichstag building, Hitler?s decision to call and election on the 5th March 1933 also played a large part in the Nazi consolidation of power; this decision was made within just 24 hours of his appointment as Chancellor. Hitler believed that not only would this consolidate Nazi power, it would also enhance his own personal status within Germany. However, once again, the use of violence was implemented into this, with meetings between socialists and communists being regularly attacked by the Nazis. Within this time period, Goering also used this authority for his own advantage, enrolling an extra 50,000 into the police; the vast majority being members of the SA or SS. However, another Nazi method of consolidating power in the elections was through the atmosphere of fear and hatred implemented into their election propaganda. Hitler lay the foundations of this tone in his ?Appeal to the German People? of the 31st of January 2013 where he blamed the poor economic conditions on democratic government and the terrorist activities of the communists; clearly this would portray the Nazis in a positive, strong light whilst repressing any opposition. Moreover, he stirred up the idea of the government as a ?national uprising? in an attempt to restore Germany?s pride and unity, this would encourage the continuation of support for the Nazis and contribute to their consolidation of power. ...read more.

As described by Karl Bracher, the Nazis had effectively led a ?legal revolution? to which the German?s had foolish succumbed to. In the space of just a few weeks, Hitler had managed to complete the consolidation of power by legally dismantling the Weimar Constitution and allowing the Nazis to emerge as victorious, preparing for the inevitable totalitarian dictatorship. In conclusion, I believe that the use of violence and terror were most definitely responsible for the Nazi consolidation of power in 1933. These methods were implemented into the majority of actions in the Nazis attempt to begin a totalitarian dictatorship. Without the help from the brutal SA, many would not have been frightened into voting in the March elections and therefore the Nazis would perhaps have gained an even smaller figure. Moreover, the Nazis aimed to weaken the opposition by using the SA to attack both the socialists and communists, thus allowing them grow further in strength. Furthermore, violence and terror was also seen due to the ?Decree for the Protection of People and State?, with hundreds of anti-Nazis facing imprisonment and resulting in the violence reaching new heights. Although the Reichstag Fire, the Enabling Act and the March elections all played significant parts in the Nazi consolidation of power, many would not have been achieved and exploited effectively had it not been through the encouragement of violent acts from leading Nazi figures. ...read more.