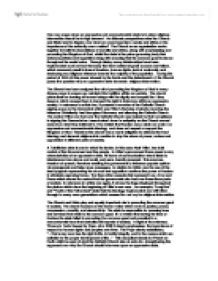 One may argue when an oppressive and unconscionable state is in place religious intervention should be in high demand. As different perspectives arise the Church and State tend to dispute over what are more important, morals and ethics or the importance of the authority over a nation? The Church as an organisation works together to build the foundations of morality and ethics, along with emphasising and promoting the Kingdom of God, whilst the state is the prime governing body that enforces policies and regulation along with ensuring that the common good is shown throughout the social order. Through history many dictatorships have been implemented such as Nazi Germany that have achieved great success and failure, which commonly result in loss of freedom, human rights, lack of conformity and destroying any religious influence towards the majority of the population. During the period of 1933-45 the power abused by the Nazis and the detachment of the Church poses the question why an oppressive state demands religious intervention. The Church has been assigned the roll of promoting the Kingdom of God in many diverse ways to ensure we maintain this tradition within our society. ...read more.

All forms of communication where liable to interference from above and could, and were, heavily censored. This removes freedom of speech, therefore enabling the government to influence popular opinion via propaganda and false news messages. In relation to Article one the use of the dead puppets representing the church and opposition confirms the power of Nazism to eliminate opposing forces. The three other puppets that represent Law, Army and Press which shows the control that the government also had over these three parts of society. In reference to article one again, it shows the flags displayed throughout the picture which show the beginning of Hitler's new race, for example, "Long live" and "Youth of the Fatherland" state that the ideology implemented now will follow through to many more generations which causes the out cry for religious intervention. The Church and State play and equally important role in promoting the common good in society. The church focuses on the human vales which are love, justice, peace, compassion, morality, and stewardship. The state is responsible for pursuing laws and services that relate to the common good. ...read more.

This is another example of religious intervention needed to prevent the oppression when the Nazi party was in control. During the period of Nazism the Catholic Church still endeavoured to speak out in using subtle techniques. Mit Brennerder Sorge which is German for "With burning concern" was an encyclical of Pope Pius XXI, it criticized Nazism, condemned antisemitism and it warned Catholics that the growing Nazi ideology, which exalted one race over all others, was incompatible with Christianity. In a time where Hitler's oppressive state had a supremacy over the world, it called for mass intervention and action, not brief encyclicals that were supplied by the church. In conclusion is can be argued that the lack of religion intervention has contributed to the unjust and oppressive society throughout the period of 1933-1945 in Germany. The evidence has been used to argue the church intervention was to a minimal, and in relation to the Church barely speaking out against Nazi Germany rejects their Kingdom of God especially in relation towards the signing of the Concordat. The argument is therefore sustained that the lack of intervention of a religion in a state which is oppressive and unconscionable and it is vital in order to establish the Kingdom of God throughout humanity. ...read more.