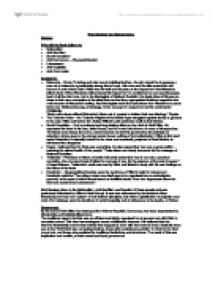 Nazi Ideology and Government. Ideology What did the Nazis believe in: * Nationalism * Anti-Semitism * Social-Darwinism * Anti-Democracy - All powerful leader * Lebensraum * Anti-Capitalist * Anti-Communist Inspired By: * Nietzsche - Wrote "A daring and ruler race is building itself up...the aim should be to prepare a new set of values for a particularly strong kind of man...this man and his elite around him will become 'Lords of the Earth.' Hitler saw himself and his party as the 'superman' that Nietzsche talked about. When Nieztsche talked about this 'superman' he envisioned no one special people, least of all the Germans, but to the ideologists of National Socialism the basic idea of this was so close to their own conception of the ideal German that they appropriated it without regard for the main tenants of Nietzsche's writing. Nazi ideologists stole two basic ideas from Nietzsche to use in there own Weltanschauung, or ideology, 1) the concept of a superman and 2) ...read more.

Nazi ideology drew on the Nationalism, Anti-Semitism and heroism of these people and was particularly articulated by Hitler in Mein Kampf. It was later elaborated by the fanatical Albert Rosenberg and was not a system of well defined principles, but rather a glorification of prejudice and myth. It's mainstays were the doctrines of racial inequality and of adherence to the leader, or Fuhrer. Government. By the end of 1934 Hitler had destroyed the Weimar Republic. Democracy had been superseded by dictatorship and institutionilised terror. The traditional view is that this was an efficient and tightly organised for of government with Hitler in complete control. This view has undergone recent modification however. It is believed that the German dictatorship was far less orderly than supposed, even with elements of chaos. Basically there was in the Third Reich two competing factions, those with revolutionary activism in mind for the Nazi movement, and those who persisted for traditional institutions and structures. The result of this was duplication and conflict, at both central and local government. ...read more.

Rauchning was a Nazi. 1960's - New Beliefs. * Two schools of thought. a) Historians who took Nazism seriously as a theory, doctrine and principle. b) Historians sceptical and cynical of the Nazi self presentation a) * Historians including Fest, Davidson and Rich. * Believe that Hitler is formatively important to the focus of the Reich and State. * Political development of the state was driven by the primacy of Hitler as the centrepiece of Nazi society and government. * Stress on understanding Hitler. i.e. Holocaust planned, developed and led from the centre by Hitler. b) * Historians including Broszat and Mommsen. * Hitler could not be the centre of the Nazi state. Argues that National Socialism was not original and behaved in a manner no more than it's propaganda and slogans dictated. Hitler was an invention of the propaganda ministry. * No clear plan for government, state, society, civil service etc. * Short term ideology, but no capacity for long term stability. Mommsen argued that Hitler's foreign policy and government does not relate to his ideological aims in Mein Kampf. The chaos of the party simply staggered from crisis to crisis. ...read more.