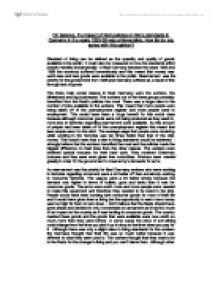 On balance, the impact of Nazi policies on living standards in Germany in the years 1933-39 was unfavourable. How far do you agree with this opinion? Standard of living can be defined as the quantity and quality of goods available to the public. It could also be measured on how the standards affect people mentally and physically. In Nazi Germany between the years 1933 and 1939 the economy suffered horrendously and this meant that money was worth less and less goods were available to the public. Rearmament was the priority for the government from 1936 and Germany suffered as a result of this through lack of goods. The three main social classes in Nazi Germany were the workers, the Mittelstand and big businesses. The workers out of the three groups probably benefited from the Nazi's policies the most. There was a huge raise in the number of jobs available to the workers. This meant that more people were being taken off of the unemployment register and more people were in employment. This would have been a huge benefit for this social class because although consumer goods were not being produced as they used to, more jobs in factories regarding rearmament were available. ...read more.

The Mittelstand were probably the biggest losers out of the three groups. A large portion of the Mittelstand lost their jobs, and living, through debt and reduction in specialised craftsmen. As the priority for the Nazis was rearmament the Mittelstand suffered from a reduction in imports and generally farm life was a thing of the past and people were now suffering from this. Farmers were losing their facilities and life was become very poor on farms. I don't think that the future of Germany was in rural areas because the Nazis had started a new era in Germany and war was the long term situation in Germany. The rural population fell by 3% and this was probably mostly because farmers knew that their businesses wouldn't sell like it used to and they had to get new jobs in factories that were in the city. They had to move on. The businesses that did stay on had to compete with larger firms as well and this simply wasn't possible. I believe that the Nazis made huge mistakes in their actions and anyone who didn't work in the city was going to lose out with the new policies. Rural life had been put to the side and it was simply worse off. ...read more.

One of the main losses for the big businesses was that they could not have any imports. Although it would mean that there was a good balance of trade it meant that materials that could be required were not available. Another disadvantage was that the state controlled the trade of businesses. I imagine that businesses would have liked to control their own trade and to have somebody else doing it instead would have been a disadvantage as they wouldn't have a great idea of how their trade was bearing. In conclusion I agree that 'on balance, the impact of Nazi policies on living standards in Germany in the years 1933-39 was unfavourable'. The majority of people suffered more than they benefited. I just don't think that the Nazis had considered everyone in their policies and it shows. They only seemed to care about rearmament and I think that this was the whole point of the Nazi party. As long as it was achieving what it wished it didn't really care about what else happened. In the whole the Mittelstand didn't benefit at all, the workers briefly benefited and the businesses benefited momentarily. There weren't enough benefits to call the policies a success for the whole of Germany. Only certain areas actually benefited and this meant that Germany didn't really receive any favours from the Nazi policies. ...read more.