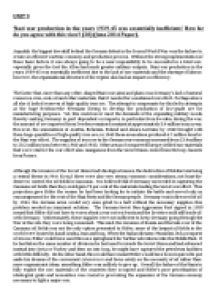 Nazi war production in the years 1939-45 was essentially inefficient. How far do you agree with this view?

ï»¿UNIT 9 ‘Nazi war production in the years 1939-45 was essentially inefficient.’ How far do you agree with this view? (30) (June 2014 Paper)- Arguably the biggest downfall behind the German defeat in the Second World War was the failure to create an efficient wartime economy and production process. Without the strong implementation of these basic factors it was always going to be a near impossibility to be successful in a total war, especially given the fact the Allies had much greater military outputs. Nazi war production in the years 1939-45 was essentially inefficient due to the lack of raw materials and the shortage of labour; however, the organisational structure of the regime also had an impact on efficiency. The factor that, more than any other, shaped Nazi war aims and plans was Germany’s lack of natural resources, iron, coal, oil and other materials, that it needed for a sustained war effort. Perhaps above all else it lacked reserves of high-quality iron ore. The attempt to compensate for this led to attempts at the huge Reichswerke Hermann Göring to develop the production of low-grade ore for manufacturing purposes. Yet, this could never meet the demands of the expanding military needs, thereby making Germany in part dependent on imports, in particular from Sweden; during the war, the amount of ore imported from Sweden remained constant at approximately 5.4 million tons a year. ...read more.

The use of foreign labour became of even greater importance once all the able bodied German men were called to the front. From 1943 to the end of the War, 2.5 million extra foreign workers were employed. However, in an attempt to increase production, Fritz Sauckel, Plenipotentiary General for Labour Allocation, attempted to improve the situation. In March 1944, all eastern workers were given the same rate of pay and benefits as other foreign workers. These attempts were too little, too late, however, as thousands died on projects such as the V2 rocket production for want for basic food and shelter. As a result of such poor treatment, the recruitment of millions of forced labourers failed to solve Germany’s labour problems. In addition to this, Germany also failed to utilise the female workforce in Nazi war production. The restriction on women labourers during World War II may seem to some minor, trivial and unimportant, but it emerged as a significant factor in Germany’s failure as a dominant power and their inefficient war production. Between 1939 and 1944 Germany was suffering from a large labour shortage and only an extra 200,000 women entered the workforce. Hitler’s view of the women’s role revolved around ‘Kinder, Küche, Kirche’ (children, kitchen, church); this encouraged women to leave work and spend their days concentrating on the three Ks, as this was considered to be their place in society. ...read more.

In addition to this, Speer, wherever possible, encouraged industrialists to join his ministerial team and excluded military personnel from the process. Speer was vital in coordinating and rationalising the Nazi war production process and implemented many new initiatives such as; employing more women in the arms factories, making more effective use of concentration camp prisoners as workers and preventing skilled workers being lost to military conscription. Speer?s importance was shown in the figures produced: tank production increased by 25 per cent, ammunition increased by 97 per cent and total war production increased by 59 per cent. However, despite the vast improvements, the Allies still out produced Germany. Although the appointment of Speer enormously improved the efficiency of Nazi war production, it was still not enough to change the course of war. Overall, it is clear that the German economy did not expand sufficiently to meet the demands of ?total war? and Nazi war production in the years 1939-45 was essentially inefficient. This was primarily due to the shortage of raw materials and the shortage of labour. The key to this economic failure was the fact that the conquest did not make up the shortfall in these two essential components of any industry. Yet economic development was also hindered by other influencing factors such as the lack of restructuring, which reflected the pre-war period and the conflicts between the impulses of an ideologically destructive regime and one for economic growth. Although the rationalisation process did increase productivity, it was not enough to override the fundamental problem of the lack of raw materials and labour. ...read more.