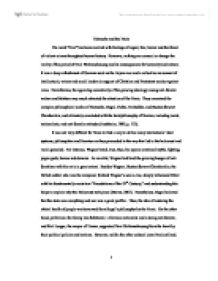 Nietzsche and the Nazis.

Nietzsche and the Nazis The word "Nazi" has been recalled with feelings of regret, fear, horror and the threat of violent crimes throughout human history. However, nothing can conceal or change the reality of the period of Nazi Weltanschauung and its consequences for humanity and culture. It was a deep refreshment of German souls as the Aryan race and a collective movement of intellectuals, writers and social leaders in support of Christian and Protestant society against Jews. Nevertheless, the appealing eccentricity of the growing ideology among anti-Semite writers and thinkers very much attracted the attention of the Nazis. They examined the complex philosophical works of Nietzsche, Hegel, Fichte, Treitschke, and Huston Stewart Chamberlain, and ultimately concluded with the hard philosophy of Nazism, including racist, nationalistic, and anti-Semitic attitudes (Aschheim, 1992, p. 123). It was not very difficult for Nazis to find a way to utilize many intellectuals' ideal systems, philosophies and literature as they proceeded in the way that led to the holocaust and racial genocide. For instance, Wagner hated Jews, thus, his operas contained myths, fighting, pagan gods, heroes and demons. As an artist, Wagner had bred the growing hunger of anti-Semitism with his art to a great extent. ...read more.

At this point, it is clear that, according to the point of view of the Nazis, Nietzsche's open-ended philosophy was working for them and their goal, while making Nazis' ideologies concrete and reliable. The Nietzschean overman was the model of the Aryan race, which was destined to conquer other lesser races in the global struggle for racial supremacy (Canada, 1997). Nietzschean "heroic idealism" embodied the virtues of hardness, masculinity, leadership, courage, power, struggle, and the various other characteristics promoted by the Nazis. By introducing the overman to humanity, Nietzsche advised people to challenge themselves, not to live passively. It was a good reason for anti-Semites to take action and responsibility in the way that led toward creating a higher against reproducing a lower. Having a great willingness to be powerful in order to take possession of the life and destiny of a superior race, Nazis needed the cooperating hand and inspiration of Nietzsche's philosophy, and Nietzschean themes and phrases, such as "the will to power." Because Nietzsche cried out for the survival of the strongest, thus, a strong world while building his philosophy and creating the overman, at the same time, he supplied Nazis with a strong argument that they later used to reinforce their ideological system and movement. ...read more.

As it is clear in the preceding quotation, the educational system based on Nietzschean doctrines was inevitably one of the main points of argument for the reasons of genocide and other violent acts committed by Nazis. Without a question, Nietzsche was perceived by the Nazis as being the intellectual and spiritual pillar of their regime (Canada, 1997). Such a creative policy gave the Nazis an intellectual justification and respectability to their ideology, while being the source of legitimization to their actions as well. Perhaps the most telling explanation of Kohn (as cited in Canada, 1997) concerning the Nazis' motivation for appropriating Nietzsche, was that the former were attempting to create a mythical continuity in German history that would serve as a means for legitimizing the Nazi Weltanschauung.. As a result, with the great desire of being the biggest power not only in Germany, but also in the rest of the world, the Nazis made use of everything that would serve their purposes. And building upon a philosophical basis of a very appropriable scheme of Nietzsche, Nazis managed to draw their political culture upon vital foundations of one of the turning points of German history. ...read more.